Widespread outrage might lead to reconsideration of country's blasphemy law or other reforms.
Jeremy Weber|August 7, 2009

As the prime minister of Pakistan visited the scene of the Muslim nation's worst Christian persecution in recent memory Thursday, observers wondered if the violence will finally prompt the repeal of the country's notorious blasphemy laws.

Rumors of a Qur'an desecration at a Christian wedding in the eastern village of Kurian led to violent demonstrations that culminated August 1 in the destruction of more than 100 Christian houses in nearby Gojra. Eight Christians were killed in the mob violence, including six family members burned alive in their home. Pakistani authorities said the Qur'an desecration allegations were unfounded and that banned Sunni extremist groups in the area had incited the attacks.

The violence in Gojra, a town of 150,000 that has long been a headquarters of the Anglican Church of Pakistan, was one of the worst attacks ever against the religious minority. Christians and human rights groups protested the killings in major cities as Christian schools nationwide closed for three days in symbolic protest.

Violence against Christians in the Punjab is sadly nothing new: observers mark over 30 group incidents against Christians since September 11, 2001. And the province was the location of two of Pakistan's most dramatic incidents of persecution: the October 2001 church attack in Bahawalpur that left 16 Christians dead and the February 1997 destruction of the Christian village of Shantinagar.

Punjab is the center of Pakistan's small Christian community—an estimated 3 million in the Muslim nation of 175 million—and home to an estimated 40 militant Islamist groups.

Still, response to this attack was unique. For the first time, TV and online media spread the news widely enough ... 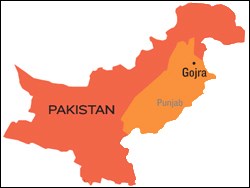