Quentin Tarantino delivers Jews scalping Nazis in a go-for-broke WWII epic that shocks, electrifies, and horrifies, all in the name of entertainment.
Annie Young Frisbie|August 21, 2009
Our Rating

"Watching Donny beat Nazis to death is the closest we ever get to going to the movies."  And with that choice line of dialogue, America's geekiest film director Quentin Tarantino simultaneously justifies and condemns the violence in his blood-laced WWII slaughterfest Inglourious Basterds.

Led by Lt. Aldo Raine (Brad Pitt), the Basterds of the deliberately misspelled title are a scalping, torturing cadre of Jewish American soldiers who conduct a reign of terror against the Nazis, under direct orders of the U.S. military. (The film never explains the misspelling, except for a shot of the phrase written on Raine's helmet.) The Basterds' tactics are brutal, vengeful, and certainly wouldn't be condoned under the Geneva Convention, particularly Raine's trademark—carving a swastika into the forehead of the lone survivor they leave in the wake of every ambush.

Lt. Raines and company are tapped to join forces with German film star Bridget von Hammersmark (Diane Kruger) in a covert operation set to take place at the premiere of Joseph Goebbels' (Sylvester Groth) latest propaganda film. Nation's Pride tells of the exploits of Private Fredrick Zoller (Daniel Brühl), a Nazi war hero after singlehandedly killing several hundred enemy soldiers from a bell tower. Pvt. Zoller is trying—and failing—to pitch the woo at Emmanuelle Mimieux (Mélanie Laurent), the comely owner of the theater chosen for the premiere, unaware that her real name is Shosanna. Having narrowly escaped the slaughter of her whole family at the hands of notorious Jew hunter Col. Hans Landa (Christoph Waltz), Shosanna has her own plans for the premiere, thanks to a basement filled with explosive nitrate 35mm prints.

The intricate plot offers a wealth ... 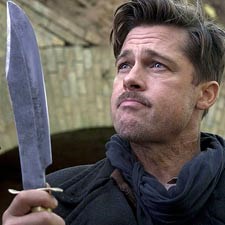