This mostly funny fish-out-of-water tale touches on ideas about what makes a marriage work.
Alissa WilkinsonDecember 18, 2009
Our Rating

Did you hear what happened to the Morgans—that high-powered, uptight Manhattan couple? Paul and Meryl had been separated for three months, but Paul had talked Meryl into having dinner with him. On the way back, they witnessed a murder and were swept away into the Federal Witness Protection Program—all the way to Ray, Wyoming, where they stayed with the local sheriff and his deputy and wife (played by Sam Elliott and Mary Steenburgen). The killer is still on the loose, but Meryl and Paul are learning about more than just shooting guns and riding horses—they're discovering what it takes to rebuild trust and recreate a marriage.

Somewhere between a romantic comedy and a fish-out-of-water slapstick, the unfortunately titled Did You Hear About the Morgans? is best described as, well, amusing. Writer/director Marc Lawrence cut his chops on plenty of rom-coms, writing films like Miss Congeniality and directing Hugh Grant in Music and Lyrics and Two Weeks Notice.

Playing on the latent red state/blue state prejudices of the moviegoing population, the film delivers some funny if halfway-caricatured dichotomies between the truck-driving, gun-totin', biscuits-and-gravy-eatin' residents of Ray and the Blackberry-totin', salad-dressing-on-the-side Morgans. In the end, of course, the Morgans learn from their hosts, and the town sticks up for the Morgans, and everything turns out fine—though I don't think we'll find Paul and Meryl back there any time soon.

Hugh Grant plays Hugh Grant, which is exactly what we want to see when we go to a Hugh Grant movie: British, dry, dashing, and occasionally bumbling. (One scene under the stars seems to reference several Grant movies—or maybe I've just seen too many of them.) ... 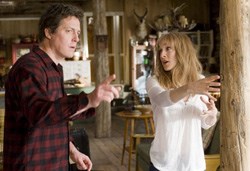