Boy loves girl, girl says there is no such thing as love; their relationship unfolds over the course of 500 days in this extraordinarily creative rom-com.
Frederica Mathewes-Green|July 17, 2009
Our Rating

Summer Finn, a narrator tells us, is an average woman in many ways—like height and weight, though slightly above average shoe size. Yet something about her arrests men's attention. She gets an average of 18.4 double takes per day. This is, we are told, "the Summer Effect."

She's the new assistant to Vance, who runs a greeting card company. Tom Hansen, one of the card writers, is struck by her presence. A few days later, in an elevator, she overhears the Smiths leaking from Tom's earphones. "I love the Smiths!" she says, then softly sings along, "'To die by your side, is such a heavenly way to die.'"

And so a relationship begins. But what kind of relationship is it? In a conversation soon after at work, Tom says it's possible to meet the one you were made for and fall in love forever. Summer says she doesn't believe in love; all she wants is to "have fun and save the serious stuff for later." At this, Tom's bug-eyed coworker McKenzie blurts out, "She's a dude!" 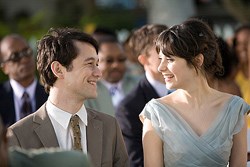 This movie charts 500 days in Tom and Summer's relationship, skipping forward and backward during that time (though preceding each scene with the day's number, to keep us oriented; this is not one of those artsy time-shuffle films that sets out to confuse you). And, though it's billed as a comedy, it casts a powerfully romantic spell. There will be proposals in the wake of this movie. Yet it's determinedly unsentimental, and there's nothing about it to repel male viewers. It doesn't look particularly romantic from the outside. It sneaks up on you.

What it does look like is an extraordinarily creative stretch of filmmaking. There are segments that recall Michel Gondry's special effects (particularly in Eternal Sunlight of the Spotless Mind), as an entire streetscape changes from photography to a sketch then fades away. There are parodic moments that recall Woody Allen (particularly in Love and Death), as when Tom, dejected, watches a classic Ingmar Bergman movie and becomes one of the characters, a knight playing a game with, not Death, but Cupid. There's great use of split screen, a staple of romantic comedies since the Doris Day / Rock Hudson days, in this case showing us "Expectation" and "Reality" when Tom goes to a party at Summer's apartment. Elements of The Graduate are used to good effect. The morning after the first time Summer and Tom sleep together, Tom glances at his reflection in a car window and sees a Star Wars-era Harrison Ford. And I'm not even going to try to describe the exuberant song-and-dance sequence that follows, patterned directly, it seems, on the great falling-in-love spectacle in Central Park in Enchanted. (An animated bluebird even perches on Tom's finger). This is a movie that is enormously fun to watch (and I mean that literally), because something clever and unexpected is always about to meet your eye. 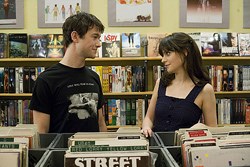 What's lacking, I think, is a story. Tom and Summer meet and have fun together, then things cool off, and a little later there's an ending. (It's an unexpected and gratifying ending, though, which elicited happy applause). Is the character of Summer fascinating enough in itself to carry the film? I don't know. She's not a minx or a mystery woman, and she isn't a smoldering source of sexual tension and emotional sadism like the bad ladies of old-time movies. She has a wide-eyed look and a knack for quirky opinions ("'Octopus's Garden' is the best Beatles song ever. I love Ringo." "But nobody loves Ringo." "That's why I do.") Her clothes are cute, not sexy, and not a bit revealing. She wears her dark hair in bangs, sometimes in a high ponytail, sometimes with a bow on top. Her voice is a bit high, with a charming little break in it. I realized: she's Marlo Thomas. She's the dream girl of 1966, straight off the set of That Girl. This is a very endearing type, but not one that fascinates like a cobra, in the Marlene Dietrich sense. Ninety-five minutes may be about all you want.

(In fact one of the surprises of (500) Days of Summer is how little things have changed in the last 40-something years. After a first date, Tom exults, "She likes both Magritte and Hopper, and we talked for hours about 'Bananafish'!" Those same markers of youthful intellectuality could have been cited when I was in college, back in the dark ages.) 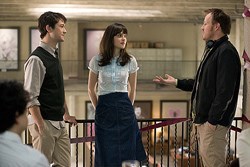 On the set with director Marc Webb

Tom is less interesting—perhaps intentionally, to preserve him as a foil for her cuteness. Actor Joseph Gordon-Levitt maintains a non-committal facial expression throughout, which makes his dejected days even funnier. His heartbreak provides the film's best humor, in fact. Early on he says he says "I love Summer" and a series of clips shows us each feature he adores, including "the heart-shaped birthmark on her neck." In a later scene, much worse for wear, Tom growls, "I hate Summer," and we see the very same clips, now including "the cockroach-shaped blob on her neck." After the breakup, Tom can't help obsessing to his blind date about Summer, about why he loves and hates her, and concludes, "There are only two explanations. Either she's an evil, heartless woman who doesn't care what pain she causes—or she's a robot. Which is not all that unlikely, really. Remember 'Small Wonder'?"

This is one of those movies which make a star-rating-system a challenge, because it deserves very high marks for visual and screenwriting cleverness, while being a bit thin in the story department. Christian viewers may be outraged that a film that takes premarital sex for granted, and uses it for humor, would garner any praise at all. I hear you. We live in a crazy time. But within the range of new films coming out these days, this one isn't particularly titillating—and it sure does make marriage look like a most wonderful thing. When the subject is marriage, Summer's face breaks into powerful emotion such as we've never seen before, and it's very affecting. Many a young man, leaving the theater to the bouncy strains of Mumm-Ra's "She's Got You High (and You Don't Even Know Yet)," is going to be wondering if the time has come to tie the knot.

A very small sequence in the film gives a quiet endorsement to that sentiment. While McKenzie tells the camera, "I don't care, as long as she's cute and she's willing. I'm flexible on the cute," Paul describes how he and Robin met in elementary school and "just clicked," and have been together ever since. Then he says, "Truthfully? She's not the girl of my dreams. The girl of my dreams would have …" and he lists some preferred physical attributes. "But Robin's better than the girl of my dreams," he says. "She's real." Even the old Moral Majority could endorse a line like that.

(500) Days of Summer is rated PG-13 for sexual material and language. While there is no nudity or depiction of sex, sex is a frequent topic of conversation among these unmarried characters. There are occasional obscene words.

1 of 3
Joseph Gordon-Levitt as Tom, Zooey Deschanel as SummerTom falls completely for SummerOn the set with director Marc Webb