This heartwarming Jordanian fable about a janitor with a dream puts cookie-cutter characters in a boilerplate plot, but still might make you cheer.
Annie Young Frisbie|July 3, 2009
Our Rating

There's something thrilling about seeing the classically American Horatio Alger story transported into a repressive society—just ask the bountifully blessed team behind the immensely popular and critically lauded Slumdog Millionaire. Jordanian writer/director Amin Matalqa aims at the same magic with Captain Abu Raed, where street kids know better than to dream of growing up to fly a plane, and where even the most successful women are defined by marital status.

Abu Raed (Nadim Sawalha) is a simple airport janitor who has never questioned his lot in life. A widower, he still takes two cups of tea to his roof each evening, where he converses with his late wife as he looks out over his spectacular view of the city of Amman. It's never occurred to him to dream of anything greater, but when he finds a captain's hat casually tossed into a trash can, Abu Raed picks it up, an impulsive act that transforms his outlook on life.

Now calling himself Captain, Abu Raed seeks out a group of kids who play soccer in the dust and dirt. He entrances them with fabricated stories about all the cities he visits, his goal to bring joy to their otherwise drab lives. But one boy holds himself aloof—Murad (Hussein Al-Sous), Abu Raed's downstairs neighbor, whom Abu Raed hears at night enduring beatings from his father. Murad wants to shatter Abu Raed's illusion, because he knows that no one from their neighborhood could ever end up a pilot.

The one character who has achieved what Abu Raed and Murad can only dream about is Nour (Rana Sultan), a thirtysomething woman from a wealthy family who has a career as a pilot, but not the husband and children that would bring her father glory. Her path crosses with Abu Raed's, and the two forge an unlikely ... 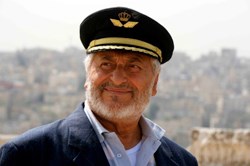