The boy wizard and his friends grow up, experience romance, learn about Voldemort's beginnings, and more. PLUS: Is Harry the Chosen One?
Lisa Ann Cockrel|July 14, 2009
Our Rating

If my friends and family are any indication—and the legions of Hogwarts fans online tell me that they are—the latest Harry Potter movie is being greeted with a great amount of anticipation. My sister-in-law planned to dress up as an Inferius and drive three hours to join friends at a midnight opening. And at least two other groups of friends have been holding ad hoc Harry Potter movie festivals over the last couple of weeks, watching the first five movies in the series in preparation for the sixth—Harry Potter and the Half-Blood Prince.

That movie-watching effort will be rewarded in the first moments of Half-Blood Prince as it picks up in the immediate aftermath of Harry Potter and the Order of the Phoenix. There are clues as to what just happened in those opening moments as Harry stares against the flashbulb-induced glare of a gathered crowd—newspaper headlines report Voldemort's return, for example. But anyone who hasn't seen the previous movie—or doesn't remember it (it has been two years since the last release in the series, much to the chagrin of many fans) will be at a distinct disadvantage. Though, as Harry tells Dumbledore not long after the wizened wizard shows up and starts making demands with little in the way of background information, you learn to roll with it. 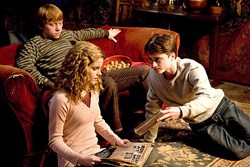 As with previous movies that have introduced us to a new faculty member, Half-Blood Prince quickly introduces us to the addled Professor Slughorn, played by an always-excellent Jim Broadbent. Dumbledore manages to recruit Slughorn to return to his old post as professor of potions at Hogwarts by raising the prospect of the prestige that could be his for teaching Harry, now known in HP lore as "the Chosen One." "He will try to collect you," Dumbledore explains to Harry, who quickly surmises that he should allow it in an attempt to get Slughorn to reveal a long buried secret that might be the key to defeating Voldemort. For among Slughorn's collection of notable students is the one who was known as Tom Riddle before he became He-Who-Must-Not-Be-Named.

While Harry sets about his job of wooing Slughorn, his classmate and nemesis Draco Malfoy is working on his own secret assignment while skulking around the Hogwarts castle in sharply tailored black suits. He looks like a junior member of a wizarding mafia, which is perhaps an apt description of the Death Eaters, an exclusive group of Voldemort's most loyal supporters that initiates Draco early on in the movie. But as Draco becomes a more tortured figure—wracked by his loyalty to his family, his desire to be respected, and the specter of his task—something curious happens. He actually becomes less clearly to be reviled. As his exterior is polished to a dark shine, you more clearly see its contrast with his interior, a boy who wants to belong and be loved more than just about anything else.

The power of belonging is a recurring theme in the Harry Potter storyline. It builds some people up and destroys other people. The slimy Severus Snape is shaped by his desire to belong yet never being warmly accepted by his peers. Whereas Harry, an orphan with no loving family to which he truly belongs, finds a kind of ground for his being when he is sorted into the Gryffindor house at Hogwarts and meets the people to whom he most belongs for the rest of his life. The real magic of the Harry Potter series comes not from spells and potions, but from the sustaining friendships of Harry, Ron, and Hermione. These relationships, as much as the fantastical world of giants, and Veela, and Pensieves, keep readers returning to this story.

For Christian fans of the series, this power of community is especially relevant. Our faith is meant to be lived in the context of community; together we suss out God's will and work to share his love with the world. There's no need to be shy about the fact that we need each other, as Hermione effectively reminds Harry at the end of Half-Blood Prince.

At the same time, a viable comunity should never be inured to the experience of the outsider. It's uncomfortable to see Harry blinded to Draco's suffering, but we too can be hardened to those we feel, rightly or wrongly, pitted against. It would be too simple to say that all Draco or Snape needed was to be accepted and things would have turned out differently for everyone. But as both men trudge down their chosen paths, it's hard not to wonder how things might have been different for each of them. If nothing else, Draco and Snape show us the lengths to which some people will go in order to belong, even if doing so ultimately brings a kind of destruction.

Of course, community isn't static, and relationships can change. And in Half-Blood Prince we see a certain, familiar hormonal buzz take over Harry and his friends at Hogwarts. Though they've long been dealing with the adult matters of fighting against dark magic, with this movie Harry and Ron and Hermione shed their childishness and emerge charged with a newfound romantic appreciation for the opposite sex. And with that newfound appreciation comes an equal measure of angst and unrequited emotion. In this case, Ron and Hermione dance around each other with other partners, while Harry and Ron's little sister, Ginny, get more directly to their budding romance. 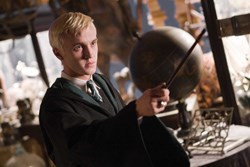 All the while, Harry is picking up magical tips from a mysterious character known as the Half-Blood Prince—a previous owner of the used Potions textbook Harry is now using. This so-called "prince" didn't put his real name on the book, but certainly left his mark—by writing his own helpful notes and spells in the book's margins. Some of these tips come in handy for Harry along the way, to the scowling disapproval of the by-the-book Hermione.

Meanwhile, Voldemort is always lurking just off stage left, so romance takes a backseat when Dumbledore and Harry dash off on a dangerous mission and the Death Eaters stage a dramatic attack on Hogwarts in their absence. During this attack, the Dark Mark appears above the castle, only to be eradicated by the light from hundreds of wands held aloft by the faculty and students of the school—a vivid example of light overcoming the darkness, a recurring theme in the books and films.

Adapting the Harry Potter novels for the screen is largely a thankless task. The source material is rich and has a devoted following. Everyone will be able to impugn some sort of misstep to each screenplay. And so too here, there are some frustrations with pacing and the chosen highlights on the narrative arc. The last ten minutes of the movie delivers an emotional sucker punch with little to no space given to exorcise those feelings, sending fans out into daylight with little more than an ellipses. 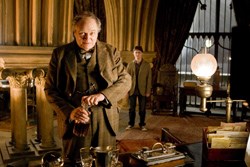 But I would contend the sins here are mostly those of omission. If you watched the five preceding movies leading up to Half-Blood Prince, you still might want to go back and read book six to remind yourself of so much of the detail and plot that are only hinted at on the big screen.

I was skeptical when it was announced that the seventh and final book in the series will be adapted in two movies. I figured it was just a move by the studio to milk as much money from the franchise as possible. But after Half-Blood Prince I can say that I'm relieved to know that Harry Potter and the Deathly Hollows will be getting such expansive treatment. I, for one, am already looking forward to November 2010. And I doubt I'm alone.

Harry Potter and the Half-Blood Prince is rated PG for scary images, some violence, language and mild sensuality. While this rating is downgraded from the PG-13 rating of the previous Harry Potter and the Order of the Phoenix, caution is still in order for younger viewers. The light romance and brief kissing scenes withstanding, the material is often dark and disturbing. You only get glimpses of creatures like the Inferi, undead corpses who do the bidding of wizards, but the idea of them is scary enough. And the violence includes the destruction of the Weasley home, a scene in which Harry steps over the line in a duel with Draco, and the death of a beloved character.

1 of 4
Ron, Hermione, and HarryHero Fiennes Tiffin as a young Tom RiddleTom Felton as Draco MalfoyJim Broadbent as Professor Slughorn