An outlandish premise kicks off a most satisfyingly funny and romantic love story, with Sandra Bullock and Ryan Reynolds at the top of their games.
Annie Young Frisbie|June 19, 2009
Our Rating

Contrived is almost too soft a word for the premise of The Proposal, Sandra Bullock's latest romantic comedy offering, yet the fresh dialogue, gorgeous scenery, and ultimately winsome love story make this one of the most appealing romances to come down the pike in recent years.

Bullock plays Margaret Tate, a hard-as-nails book editor in the vein of Meryl Streep's iconic Miranda Priestly from The Devil Wears Prada. She's so loathed and feared that her employees send out frantic instant messages warning of her impending arrival in the office. "The witch is on her broom." But unlike Anne Hathaway's bumbling, lost Andie from Prada, Margaret's assistant is skillful, competent, ambitious Andrew Paxton. As played by Ryan Reynolds, Drew has confidence to spare and has managed to stay a step ahead of Margaret's wrath for three years.

Margaret has just scored the coup of a lifetime by convincing her most reclusive author to appear on Oprah. It's a career-making move, but Margaret's triumph is cut off at the knees when she's called into the publisher's office. It seems that Margaret, a Canadian, flouted US immigration by traveling to the Frankfurt book fair while her work visa was expired. She's being deported. Her career is over.

Now, in true romantic comedy silliness, Margaret's urgent problem presents an immediate solution when Drew steps in with a phone message. He told the caller Margaret was "otherwise engaged," and Margaret's kohl-rimmed eyes narrow with a nefarious plot worthy of Queen Cleopatra herself. She announces that she and Drew are engaged to be married. Problem solved.

Drew has no desire to go along with Margaret's scheme until she points out that his career will be toast if he doesn't. It's not because Margaret will ruin ... 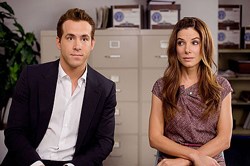