Cops and robbers collide in this thrilling Depression-era drama from the modern master of the crime epic, Michael Mann. PLUS: Overstreet on "A Mann's World."
Brandon Fibbs|June 30, 2009
Our Rating

Ever since Francis Ford Coppola abdicated the rights in 1974 after The Godfather II, no one has mastered the crime epic better than Michael Mann. Mann's Heat (1995) is, in my opinion, flawless. It's inevitable that his latest film, Public Enemies, will be compared to that masterpiece and it is not an unfair comparison. Indeed, Mann seems to invite the association, making it impossible to ignore. Public Enemies is Heat with fedoras, a gangster epic that is easily the best and most rewarding thing the director has done in more than a decade, an intensely visceral tour-de-force. In a summer season tailor made for teenagers, Mann has come out with something perfect for adults.

Public Enemies stars Johnny Depp as John Dillinger, the notorious bank robber who gained folk hero status among the populace in the 1930s for robbing the banks believed responsible for the Great Depression, and Christian Bale as dashing FBI agent Melvin Purvis, the man appointed by J. Edgar Hoover (Billy Crudup) to bring him to justice.

A sort of Robin Hood, Dillinger was an almost mythological figure, a charming bandit who treated the public with the utmost respect; they, in turn, sheltered him from a police force always a step or two behind. Dillinger's exploits only fueled his iconic status—he cleared out banks in record time and mounted audacious escapes from jail. Dillinger's mockery of the law—and the lawmen assigned to stop him—was the perfect impetus for the fledgling Federal Bureau of Investigation, which labeled him the country's first Public Enemy Number One, and charged Purvis with taking him down by any means necessary. Frustrated by the criminal mastermind at every turn, Purvis traded in his Yale-trained special agents for ... 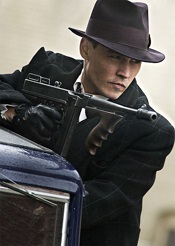