T. S. Eliot described the art of writing as a "raid on the inarticulate." Neuhaus was a brilliant raider, and never wrote a boring sentence. His many books and essays, like those of G. K. Chesterton and C. S. Lewis, will be studied for generations to come. His death in New York City at age 72 early this year marks the end of an era in America far more tellingly than the defeat of John McCain. And despite his conversion to Roman Catholicism, he remained one of the most influential "evangelicals" of the past 50 years.

But none of this was evident as "little Dickie Neuhaus," as he referred to his younger self, grew up in the Ottawa Valley of Ontario, Canada. His father was a Missouri Synod Lutheran pastor, and he was duly baptized and catechized in that Reformation tradition. Though his life would take many turns and twists, he never lost the ecclesial identity he received as a young boy.

In his mid-teens, Neuhaus was sent to a church-related school in Nebraska, where he got into all kinds of trouble organizing beer parties and leading panty raids. After he was confined to his room for several weeks, one of his teachers stopped by to check on his spiritual well-being. The teacher said, "God is very disappointed with what you did, for he thinks so highly of you. But, because he loves you so much, he forgives you and will help you to be better." Neuhaus repented with tears and gave his life to Christ in what he would later describe as a "born-again experience."

Actually, this was only one of several conversions Neuhaus would undergo in what poet Anne Sexton called "the awful rowing toward God." More shenanigans got him expelled from another school in Texas, and he never finished high school. But, through sheer ... 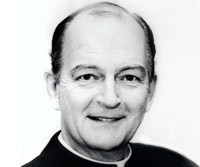