Two thrilling movies about classrooms, students and teachers, guaranteed to stir your soul.
By Jeffrey Overstreet|March 16, 2009 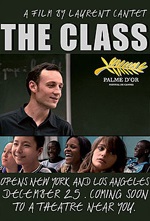 In The Class, "Seize the day" might be the worst thing the teacher could say to his students. This multi-ethnic group of troublemakers, cynics, and egoists have already seized the classroom, and if he's not careful they will seize his career and throw it out the window.

The Class, an extraordinarily gripping feature by the great French director Laurent Cantet, is a must-see for college students and teachers alike, and absolutely essential viewing for anyone who feels the urge to make a career in education.

It is, for me, a fascinating film, as my parents, my aunt and uncle, and my grandmother were all teachers, so I've grown up in and around classrooms, teachers' lounges, and parent-teacher conferences. The Class feels more authentic, thoughtful, and inspiring than any other school-related film I've seen, including To Sir With Love, Mr. Holland's Opus, Dangerous Minds, and the aforementioned Dead Poets Society. The jury at the 2008 Cannes Film Festival gave the movie their highest award—the Palme d'Or.

But don't be scared off by the fact that it's subtitled, or that it's bound to one classroom for most of its running time. The Class is as intense as The Bourne Ultimatum, offers more fodder for discussion about modern multi-ethnic societies than Crash, and is enlivened by performances so convincing you may suspect that this is "Reality Big-Screen."

Francois Begaudeau as himself; his class

It is almost, but not quite, a documentary. The French title—Entre les Murs—comes from the book that inspired it, an account by François Bégaudeau of his experiences teaching Parisian middle schoolers. Part of the film's remarkably persuasive authenticity comes from the fact that Bégaudeau does, in fact, play the part of the teacher—Mr. Marin. It's a territory he clearly understands. He and the young actors improvised a great deal of the dialogue, "playing classroom" while Cantet's cameras caught wonderful moments of spontaneity and revealing subtleties.

"The Enlightenment will be tough for them," Marin laments to a colleague. And yet, we know that students like these once studied the Enlightenment and understood it. It's difficult to diagnose the students' apathy and anti-intellectual inclinations. Is it due to troubles at home? Increasing distractions? Lack of common experiences? The culture of "instant gratification"? Christian moviegoers may respond, "They need Jesus." And of course they do, but how will they ever come to appreciate him if no one is living as an imitation of Christ for them?

Whatever the case, it seems the definition of "teacher" has changed. Mr. Marin's job description has more in common with wrestlers than schoolteachers as I remember them.

Clearly, these students are suffering in the microcosm of France's contemporary melting pot, trying to cope with complex tensions—racial, ethnic, and economic. Their behavior is about defining and protecting their identities and egos; to stand up for their rights, they defend themselves with brash attitude. They mock Marin for his use of simple English names in chalkboard sentences. "What's with the Bills?" one asks, and then the students gang up to suggest better examples: "Aïssata! Fatou!"

And it's more than just a tension between European and African. Watch how an off-the-cuff reference to sports can spark a debate between two African students that exposes deeply rooted prejudice between their cultures.

Still, the many things that divide the students are trumped by the universal divide between the young and the old. Watch how the students gang up on Marin, like sharks when there's blood in the water, when he makes a careless mistake. Just as Coleman Silk in Robert Benton's The Human Stain sparked a scandal when he used the word "spooks" to describe students in absentia, so Marin's use of "skanky" sets events in motion that just might cost him his job. A young Muslim man from Mali called Souleymane, who guards himself with steely stares and stony silences, eventually challenges Marin by asking him if he's gay. Marin, to his credit, manages to turn the question into a fruitful exchange about propriety and privacy.

While these students test Marin's patience—and ours—the beauty of their personalities and intelligence is, at times, breathtaking. You'll probably have your favorites. I was particularly delighted by the young black woman named Khoumba (Rachel Régulier). While fiercely moody and brashly disrespectful, she is also smart, surprising, and beautifully expressive.

American moviegoers have been conditioned to expect certain things from classroom movies, and The Class turns those expectations upside down. It's refreshing in its realistic unpredictability. No standing up on the desks in tribute to the teacher. No sacrificial acts or bold stands before the school board to save a troubled student. No climactic success story. The teacher doesn't feign any kind of cool to win their respect (and that's good, because real-world students have powerful radar for condescension and fakery). This isn't Mr. Marin's Opus.

Instead, we realize that somewhere in these daily sparring matches, someone is escaping notice. Someone isn't learning a thing.

This isn't a story crafted to please the audience; it's crafted to show us a picture of the world we live in, whether we're in Paris or Seattle. The film's depictions of communication breakdowns frequently reminded me of Michael Haneke's masterpiece—Code Unknown—a film about schisms between sexes, ages, classes, and races that preceded, and remains vastly superior to, the American equivalent—the Oscar-winning Crash. It breaks down the idea that a teacher can, in the course of a few weeks, tame, unify, and transform a mob of unruly, suspicious, resentful youngsters into model citizens.

That's not to say it never happens, but such an experience is extremely rare. I grew up in a small school, where all of the students knew each other, where most lived fairly comfortably, and where Christian faith was shared by the administration, teachers, students, and their families. This set the stage for greater unity and deeper relationships. I'm still in close touch with many more than twenty from my graduating class, and some of my former teachers are now my best friends. I watch The Class,  and it breaks my heart that the blessings I received are so rare.

By contrast, To Be and To Have, the other essential "classroom movie" of the last decade, is a quieter film. It may remind you as much of Into Great Silence as any other movie. 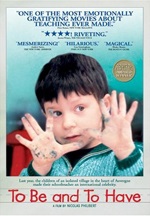 This 2002 documentary was filmed by Nicolas Philibert over the course of a year in a one-room schoolhouse, and it's every bit as inspiring as The Class—perhaps more so. After all, the students in Mr. George Lopez's class are younger, ranging from age 3 to 11. They're not so brash or full of themselves. They're still malleable and full of wonder. Whether their innocence and potential has anything to do with their remote location—a farming community in central France—the film leaves up to the viewers to decide.

To Be and To Have has become one of those films I turn to during stressful periods, to "get out of town" and visit a beautiful area in rural France. It's impressive to meet the monk-like Mr. Lopez, who has been teaching for more than thirty years. He is so masterfully gentle, so effectively firm, that you may end up thinking back to your favorite elementary school teacher—or else wish you had one so observant, tender, and conscientious.

Watching it again so soon after seeing The Class, I marveled again at how these children do not seem to have any trouble respecting authority, even if they do struggle to craft the numeral "7." They work, they color, they listen, they read, they draw, they count, they write, and they go sledding.

Teacher Lopez is the Good Shepherd

Lopez plays the Good Shepherd. Many seem distracted, like they'd rather be elsewhere. One lives in a silent world of her own. Lopez wins their trust. When two of the older boys fight, one of them, Guillaume, sits down and, instead of a curt reprimand or a threat, he takes a different approach. "I want us to talk about your argument and that fight at playtime to try and see what it means." Later, when it's time to dream about the future, one wants to be a veterinarian and, tellingly, two want to be teachers.

You'll be charmed by the children. Little "Jojo" is often the audience favorite—he has a little trouble concentrating, but his inquisitive sensibility is a joy to behold. Nathalie looks too young to be speaking, but she's one of the sharpest and most observant in the group.

With a few poetic sequences that show us the cattle-herding that goes on around the schoolhouse, and how a snowblown winter gives way to a glistening spring, the filmmakers give quiet testimony to the dignity to be found in tending to the simple, and the hope we have that the seeds that have been planted will endure hard times and burst into glory someday.

Either film is well worth your time—alone or with a group from school or church. Watch them both, and you'll find intriguing connections between them, in spite of their differing contexts, backgrounds, vocabularies, and the students' age span.

In both films, parents come in for tense exchanges with the teacher. And in both, students suffer bodily injuries among their peers, prompting swift disciplinary action, but the two incidents could not be more different. One is a documentary that plays well as a character study; the other is a character study authentic enough to be a documentary.

Maybe some will be inspired to contact their former teachers and thank them for all that they suffered while investing in us. Even if we didn't learn much in the turmoil of our classes, perhaps it's not too late to learn something from the teachers' courageous, faithful, daily stand in front of so many "dangerous minds." Write your teacher. Seize the day.

The Class is now showing in selected theaters, and will be available in DVD in May. To Be and to Have is harder to find, but several sellers have it posted at Amazon.com.