Set in the Japanese city, this triptych of short films on the theme of loneliness and social withdrawal achieves some uneven success.
Alissa Wilkinson|March 6, 2009
Our Rating

Aside from the comic shorts at the beginning of Pixar films, most people rarely see short films. Movies under a half hour or so are often used by directors as calling cards, or by film students as practice runs. Major feature films have grown from ideas explored in shorts. But as an art form, the short is generally treated as the quail's egg of the film world: diminutive, often delicious, and rarely experienced except by connoisseurs.

Lately, short film anthologies have started showing up in cinemas regularly—and oddly, many take as their central theme a major city. Think of New York Stories; Paris, je t'aime; and the upcoming New York, I Love You, all of which boast a number of pieces (some shorter than others) by celebrated directors, writers, and actors which tell a story or illuminate an aspect of life in a particular city. The short film, as it turns out, is a great way to represent the fragmented, yet intensely personal nature of the modern city, with its vast array of neighborhoods and ethnic cultures compressed into a small space.

Tokyo! is another entry into this genre. Nothing if not innovative, the three short films that comprise Tokyo! boast well-known art-house writer/directors: Michel Gondry (Eternal Sunshine of the Spotless Mind), Leos Carax (Lovers on the Bridge), and Joon-ho Bong (The Host, a truly delightful monster movie). What distinguishes Tokyo! from some of its predecessors is that all three pieces have an extended narrative, and each is distinctly surrealist. Each starts out plausibly, but reaches absurdity by the end—at its own pace. Each deals with the themes of loneliness and disenfranchisement from society, and the ways that people cope, to varying degrees of success.

The triptych opens with Gondry's Interior Design, in which Akiya and Hiroko, a boyfriend and girlfriend, are looking for an apartment in town; unfortunately, their limited funds make only tiny rat-infested holes a possibility. Akiya is an aspiring film director wrapping presents at a store to make ends meet, but Hiroko is tormented by her indecision and aimlessness. As their host grows increasingly annoyed by their presence, Hiroko spirals into despair. To explain what happens next would spoil the story, but it's sufficiently Gondry-esque in its bizarreness—and yet, it makes perfect sense for Hiroko. 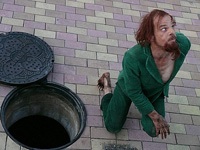 Denis Lavant as the wild creature-man in 'Merde'

Merde (the French expletive for excrement) is the weakest of the three pieces. It begins terrifyingly: an unknown wild creature-man is terrorizing Tokyo's downtown, appearing suddenly, running amok, licking girls on the sidewalk, frightening tourists, stealing wallets, and throwing grenades into public places. The media has gone appropriately crazy, and when the creature is arrested and sent to prison, it surfaces that he belongs to an obscure tribe and only a lawyer from Paris can communicate with him. The tale devolves into a raucous and often infuriating court case, and the punishment, when it is meted, is rendered ineffective.

Shaking Tokyo, the strongest entry, is a surprisingly compelling story of a shut-in (or hikikimori, in Japanese) who has not been outside the walls of his apartment in ten years. His walls are piled high with neat stacks of pizza boxes, and he receives all his sustenance from delivery people. Whether or not he's truly agoraphobic is unclear, but one day, he becomes enamored of the girl delivering his pizza, who faints in his hallway when an earthquake hits the city. Soon, he discovers that the girl has also become a hikikimori, and his love for her prompts him to venture past his doorway, where he makes a horrifying discovery.

It's hard to know what to say about Tokyo! The stories are creative and the theme is strong. Hiroko, the street creature, and the shut-in all suffer from a debilitating distrust of people—or, perhaps, misanthropy. But they choose different ways to express their disjointedness with society—Hiroko, admirably; the hikikimori, with eventual heroism; and the creature-man, with violence and destruction.

Shaking Tokyo is the most effective in communicating the sheer loneliness of modern life, in a multi-layered story that works as both a literal expression of disconnectedness and a figurative commentary on social connections mediated by a digital culture. Interior Design, on the other hand, has a purely fairy-tale quality to it—and, intriguingly, seems to posit that overcoming this loneliness requires the willingness to serve and care for another.

The real problem here is Merde: perhaps it's just beyond me, but it seems that the film is trying to be too many things at once—a screed against media circuses, a commentary on the justice system, and perhaps even a tale of a twisted Christ figure. This heavy-handedness renders the segment annoying, and undermines—or just confuses—whatever good point might have been made.

But overall, Tokyo! is an effective contribution to the burgeoning urban short film anthology genre. It offers an interesting view of three very different filmmakers' work, side by side. And it also provides some good food for thought on engagement, withdrawal, and failure of human relationships.

The film is not rated by the MPAA. All three shorts deal with adult themes: rejection, anger, death, sex, pathological loneliness. The films are in Japanese and French, but there are translated obscenities, including a handful of f-bombs. Extramarital sex is implied in Interior Design. There's male nudity and a lot of ugly language and violence in Merde. Shaking Tokyo includes some innuendo.