Ben Stiller returns as a security guard in yet another magical museum, but there’s just not much magic—or human connection—here.
Steven D. Greydanus|May 22, 2009
Our Rating

The best set piece in Night at the Museum: Battle of the Smithsonian is probably Larry Daley's wild flight through the National Air and Space Museum riding the original Wright Flyer with an animated waxwork Amelia Earhart.

At least, it's the one time in the film—in either film, really—that I felt a connection to Larry. If I ever met him now, I would say, "Dude. Speaking of crazy goings-on in the Air and Space Museum, let me tell you about the time my wife and kids and I climbed out of their elevator escape hatch and up the shaft after being trapped between floors for two-thirds of an hour. Me with a baby on my back, too." We would totally bond.

After that, we would have less to talk about, at least as regards his new adventure. In the original Night at the Museum, Larry was a night watchman whose life certainly got weird when he went to work at Manhattan's Museum of Natural History, but he himself was more concerned about his life outside the museum: his desire for his son's respect, his awkward relationship with his ex-wife and her new man, his entrepreneurial aspirations. 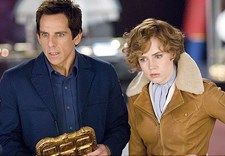 Even inside the museum, the action was driven, not by the animated exhibits, but by a trio of human conspirators. The plot was driven by human beings, even if the appeal of the movie was the special-effects eye candy. You might say the magical museum exhibits were a sort of reverse MacGuffin—it's what the audience cares about, but it isn't the characters' main focus.

This time out, though, the exhibits have taken over in more ways than one. Larry's family ties are strictly on the back burner; the movie is bookended with brief appearances by his son Nicky (Jake Cherry), but Nicky doesn't really figure into the plot or Larry's motives. Nor do any other human beings.

Larry's entrepreneurial ambitions, on the other hand, matter a great deal. Battle for the Smithsonian reveals that Larry's fortunes have changed dramatically—he's now the founder and president of his own company, Daley Devices, where he markets his inventions (the glow-in-the-dark flashlight!) on cable infomercials with name guest stars and cheering studio audiences. He's even landed a meeting with Walmart. So why isn't he more excited? "Save the celebration until we land the account" is his answer. 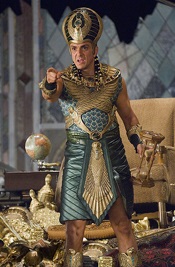 You may be thinking: Here is a disciplined, focused businessman. The movie's diagnosis, though, is different. "What I see in front of me," declares Earhart (Amy Adams), "is a man who's lost his moxie." Later, one of his old friends from the Natural History museum confides that Larry in his business suit was "all gussied up but dead inside."

Over and over the movie drives home one conclusion: Larry was born to wear the uniform of a museum night guard. The inventions, the managerial decisions, the corny televised banter with cameo-role celebrities … that's not the real Larry. The real Larry, much like an artifact in an Indiana Jones movie, belongs in a museum.

Really? I can understand his old friends at the National History museum being sad (or even, in the case of Owen Wilson's cowboy Jedediah, bitter and self-pitying) that Larry has left them. But wouldn't we all, in our better moments, be glad to see a friend at work go on to bigger and better things?

Am I thinking too much about a movie that is, in the end, about an evil plot by a waxwork likeness of the fictional Egyptian pharaoh Kahmunrah (Hank Azaria) to recruit likenesses of Napoleon Bonaparte (Alain Chabat), Ivan the Terrible (Christopher Guest), and Al Capone (Jon Bernthal) in a bid to take over the world by releasing an army of spirits from the netherworld, all while a giant rubber octopus roams the halls, a trio of Renaissance cherubs flits around crooning top-40 love songs (why?), and the two-inch Roman General Octavius (Steve Coogan) returns to ride into battle on the back of a White House lawn squirrel? 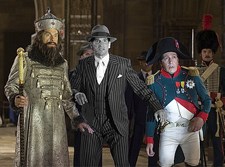 Fine. Maybe it's for the best that the museum goings-on have crowded out Larry's personal life, which made the original NATM more human but also more problematic. Along with The Santa Clause and Zathura, the NATM movies typify a thorny subgenre of family film—the broken family film—that often rubs me the wrong way. Not that every movie family must be happy and intact. But I prefer those broken family films, like The Spiderwick Chronicles and E.T., that feel the breakup of a marriage and the repairing of parents with a sense of grief and even fury to those like the original NATMin which they are just facts of life to be gotten over and accepted.

None of this matters much in Battle of the Smithsonian. The story, focused entirely on intrigues among the animated exhibits, takes a back seat to spectacle and slapstick. Robin Williams' Teddy Roosevelt, the most endearing of the original exhibits in part because of his self-awareness, is reduced to a couple of cameos. Would-be substitute General Armstrong Custer (Bill Hader), whose climactic moment of angst and self-doubt over Little Big Horn is robbed of any poignancy by the blustering buffoonery he's displayed until then, is a wash.

A few standout moments evince some real respect for the historical significance of the figures and icons represented by the museum. In an actual lump-in-throat moment, the WWII Tuskegee Airmen, the first black U.S. military pilots, pass by Amelia Earhart, and one salutes her, thanking her for her pioneering efforts and adding, "A lot of people thought we couldn't fly too." Adams' Earhart, whose breezy, fast-talking 1930s spunk deliberately evokes a working-class Kate Hepburn, is about the movie's only ray of sunshine.

Mostly, though, the historical icons are played for cheap laughs, like Rodin's Thinker (Azaria again), who turns out to be all brawn and no brain, and is less interested in cogitation than in hitting on a nearby female statue.

Of course silliness is to be expected. I don't mind the goofiness of the bobblehead Einsteins—at least no more than the notion of a bobblehead Einstein in the first place—especially since they actually solve the mathematical puzzle at the heart of the ancient tablet that Larry is running around Washington trying to decode. (So their approximation, which they wrongly specify "to be exact," is only accurate to a random eight decimal places. That's way more accurate than any of the clues Robert Langdon unravels in Angels & Demons. Anyway, they're bobbleheads.)

On the other hand, the Lincoln Memorial statue is something of a travesty. Lincoln is perhaps the most iconic figure in American history, and the Memorial is one of the nation's chief civil shrines. Surely here, if anywhere, a modicum of reverence is called for. But no. Lincoln (Azaria yet again) is merely an expensive special effect, an all-white computer-game avatar who displays no personality, displays no insight and says nothing memorable, except a random reference, apropos of nothing, to his famous "House Divided" speech (an allusion to Luke 3:25 and parallels).

There's no reverence for the Lincoln Memorial statue

Lincoln is also the locus of a major Idiot Plot problem. The giant Lincoln statue is obviously one of the most powerful figures around. Why doesn't it occur to Larry that Lincoln could settle with the bad guys in thirty seconds? Why do we have to wait another half hour for another character to show up with Lincoln at the crucial moment? Worse, why does Lincoln show up, save the day, and then leave again just in time for the huge battle at the end? Because otherwise there would be no story.

By the end, of course, Larry has his moxie back. He also kisses the girl, though for most of the film he shows little interest in Amelia, presumably because he knows that she isn't real (though this doesn't stop him from taking drastic action to save the equally unreal Jedediah). He even gets to kiss the nurse from Eisenstaedt's iconic V-J day kiss photo (for tactical reasons, though after sixty-odd years of kissing the same sailor she seems delighted with the change).

Not until the very last scene does the film suggest that Larry needs real relationships with real people, not just nocturnal adventures with fantasy friends. Of course, Larry's needs aren't really the point. The point is the Night at the Museum fans in the audience who—much like his old friends—like Larry best as a night guard at magical museums.

Night at the Museum: Battle for the Smithsonian is rated PG for mild action and brief language. There's at least one misuse of God's name and one curse word, as well as some mild innuendo and suggestive language, mostly played for laughs. (Thinker to female statue: "Hey baby, check out the gun show goin' on over here. Boom! Boom! Boom!")

1 of 4
Ben Stiller as Larry Daley, Amy Adams as Amelia EarhartHank Azaria as Egyptian pharaoh KahmunrahIvan the Terrible , Al Capone , and Napoleon BonaparteThere's no reverence for the Lincoln Memorial statue