Would you allow a stranger to die if it earned you a million bucks? That's just one of the questions at the heart of this bizarre yet surprisingly compelling film.
Brett McCracken|November 6, 2009
Our Rating

How far would you go to get a suitcase full of a million dollars? Would you kill someone? This is one of the questions at the heart of The Box, the new film from writer/director Richard Kelly, helmer of cult classics Donnie Darko (2001) and Southland Tales (2006). But it's certainly not the only question. The Box has a lot of things on its mind and a lot of tricks up its sleeve. It will keep you thinking and guessing up until—and likely past—the final shot, which is more than can be said for most thrillers these days.

The Box has one of the most intriguing, if deceptively simple, loglines of any movie this year: A normal family in 1976 suburban Virginia minds its own business at home until a strange box appears at the doorstep, along with a strange proposition by a mystery man. The mystery man, Arlington Steward (Frank Langella, fresh off his Oscar-nominated turn as Richard Nixon in Frost/Nixon), wears tailored suits, has a horrifying face (half of it is missing), and changes the lives of Arthur and Norma Lewis (James Marsden and Cameron Diaz) forever.

You see, the box at the doorstep has within it a button. According to Steward, if the Lewis family presses the button, two things will happen: 1) someone in the world who they don't know will die, and 2) the Lewises will receive $1 million in cash. Arthur and Norma have 24 hours to make the decision. Thus begins a compelling sci-fi melodrama—based upon Richard Matheson's short story (and 1986 Twilight Zone episode) "Button, Button"—that is full of moral dilemma, high concept philosophizing, pop culture pastiche, and oodles of Sartre references.

Nothing much can be said of the rest of the plot, save that it has something to do with NASA's Viking Mission ... 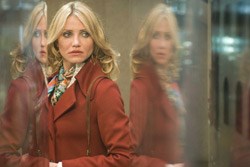