ABC's 'V' is a probing look at culture and the need for discernment, says the show's executive producer.
Interview by Todd Hertz|November 3, 2009

You might've seen the commercials for ABC's new alien-invasion series , V (our review), which premieres tonight (8/7c). It's a reinvention of a 1980s TV series by the same name, but with quite a makeover. This time, the aliens don't appear scary and lizard-like; they appear like beautiful humans, benign, almost divine—and bringing great promises to a frightened, confused world. Earthlings buy into it, though some remain skeptical—including a priest, one of the central characters, who remind his flock to test all things against the truth of Scripture. (Yes, a priest on mainstream TV actually says that.) 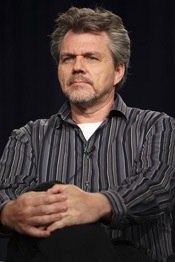 CT television critic Todd Hertz recently interviewed V executive producer Jeffrey Bell (The X-Files, Angel, Alias) about the big-idea allegory behind the show's aliens, the priest's role in the story, and the power of science fiction.

How does the creative team view the show's connection with the 1983 miniseries?

When the idea first came up, the vision was to reimagine it and pay respect to it but also to update it, give it relevance. There are differences. The lead characters are different. How the Vs [aliens, or "Visitors"] present themselves is different. How we unfold the plot is different. After all, we couldn't ignore the fact that the original show is out there. Everyone knows the Visitors have a dastardly plan. It didn't make sense to anyone to play that card face down. Instead, we thought: Let's just get to it in the first episode.

The biggest difference between the two franchises is that the original felt like a military show; it was war versus the Vs. But for us, this is about discovery. Our small band of characters sees through the Vs' plan, but don't know enough yet to wage any kind of battle. They are still living their lives as cops, priests, etc. and secretly trying to figure out what they're up against.

The original show was an allegory for the Nazis. What's the chief allegory here?

It's the idea of blind devotion. If anyone is showing up and saying something that is too good to be true, are people thinking? Are they asking questions? Are they prepared and informed? How are you deciding who you can believe? In the original, it seemed pretty easy to distinguish between visitors and humans. You knew your friends from foes. That's because in the early 80s, the idea of an enemy was a united country. A fascist German model for your enemy was a good one. Now, our enemies are not so much countries but groups and factions all over. We can't tell who is who. They are among us.

And so, the idea of paranoia is huge. In our V, you can't easily tell who is a V and who isn't. Some characters don't know their own significant others or friends are Vs. It could be anyone, anywhere. We think that captures the paranoia of the times.

Whether it is the Vs or any person offering great big promises, anyone merely accepting what is presented to them is especially at risk if the promise has a hidden agenda.It's not literally a fascist metaphor like it was originally, but it asks the same sort of question: Are you just believing what you are told?

How do you respond to the claim of conservative radio host Laura Ingraham that the Visitors have clear parallels to the Obama administration?

Oh, she said that? Fantastic. Good for her. Here's how we view it: This show was conceived during a Bush administration and is being executed during an Obama administration. There are people who really want to politicize this show, but that isn't our intention. We're just trying to tell good stories with arguments on both sides. What is interesting to us is that America—under Bush or Obama—is the giant imperialistic force imposing itself around the world for good or bad. In our story, humans are the colonials and the Vs are showing up as the imperials; we're the locals and the giant Roman army has just shown up in motherships above us.

But here, that imposing force isn't taking over by force. Instead, the Vs come with a hidden agenda cloaked in hope, promise and peace.

You could say that is true in many real-life examples. If you wanted to go with Ingraham's model, you could argue that's true of any American model. You could say,

"Well, we're going to this country and we're helping it. We're bringing food and bringing aid and bringing peace."But we're also capitalizing on it economically and taking their oil. It's not relevant to say that's specific on any certain administration. It would be true under any administration. 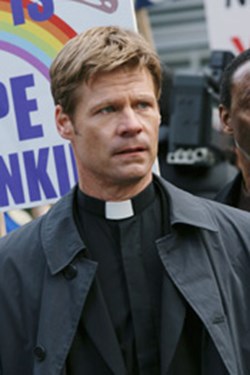 How did an Anglican priest end up as a central hero in an alien invasion tale?

In a story of devotion and belief, it makes sense to have a character who is all about devotion. For a priest, the arrival of this apparent savior forces a decision: Either everything he knows is wrong or this new information is a lie. It's a great existential question for him. Is the faith and God he believes in really true? It's a nice way to talk about the issues of faith, devotion, belief, and redemption.

With a religious character, do you have a theological consultant on the show?

Like any organization, we have a wide diversity of people and beliefs. There are people with Christian backgrounds or Jewish backgrounds or no religious backgrounds. I think we are pretty well represented in terms of diverse opinions.

What does sci-fi allow you do in terms of storytelling that maybe other genres don't?

What I love about genre storytelling is it allows you to tell stories as metaphor. When they first started Buffy the Vampire Slayer, they'd talk about each episode's "themons" as opposed to demons. For instance, you had the girl in high school who turned invisible as a metaphor for being the shy, wallflower girl who feels like she doesn't exist. And then, the very idea of a hellhole being under the high school? That's one of the great metaphors in television. With these genres, you can tell really rich stories that don't feel literal. You can talk about areas that people may not want to sit and watch a show about—but mask it in action, fantasy or science fiction and make it more palpable. I love that.

What we're exploring with V is this: If people start going against an establishment that they know is evil, are they terrorists or are they freedom fighters? Because our characters are not literally Jihadists or extremists of any real group—but are fighting aliens—we can explore more. Think about the original V: If it had been a show about a foreign power like Nazi Germany showing up to take over America, it would have been much less interesting, much more literal. Science fiction allows you to hold ideas in your head in a different way. It's a fun story about aliens—but if you want to follow it there, it can work on a very deep emotional level.

As a Christian, I felt like the way the Vs attract humans mirrors how sin can appear lovely and attractive. In fact, I thought it was also much like evangelical End Times fiction about the Antichrist. Am I reading too much into my own biases and beliefs?

I wouldn't say you are reaching. Anyone can look at it and see what they want. As a Christian, you could see the Vs as demons disguised an angel of light. As a political person you could say, "Oh, it's this person!" The beauty of it is that you can bring your own beliefs to it.

What else would you want a Bible-believing audience to know about this show?

We want to tell a really entertaining story with emotion. Some of it will make them say, "Awesome, they agree with our worldview!" Other times, they will say, "Whoa, wait a minute." We're trying to tell both sides of multiple stories and take our characters on their own journeys and surprise the audience. There's no agenda other than to tell excellent stories.