After 17 years, a dozen albums, and countless shows, Delirious calls it a day—and frontman Martin Smith reflects on his memories.
Robert Ham|November 24, 2009

Fans of Christian rock have been bracing themselves since June of last year, when it was announced that after 17 years, 12 albums, and thousands of shows, Delirious was calling it quits. Since the announcement, the band has been taking a farewell world tour, which will wrap up with a sold-out show at the Hammersmith Apollo in their native England on November 29. (The final concert will be recorded, and released on CD in 2010.) Delirious frontman Martin Smith spoke with CT about his time with the band, his future plans, and what it's like to be a Christ follower in the "secular culture" of the United Kingdom.

What brought about this decision to end Delirious?

It's been a very, very big decision. We've been together for 17 years and we've had an amazing history together. But you get those feelings when a season is coming to an end. I felt that a little while back. so I think it's time to do some different things.

Did the rest of the band feel the same way?

I think we all feel that there's more, but it's definitely my decision to pull away from the band.

What will you do after it's all wrapped up?

I'd like to be at home a little bit more. I've got six children and I'd like to enjoy that time. Then I think just sitting down on a hilltop and hearing what I need to be doing next.

And the rest of the band?

Tim Jupp (keyboards) has started The Big Church Day Out music festival, and that's already been very successful. Stuart Garrad (guitar) and Jon Thatcher (bass) are going to be doing lots of sessions and writing. Everyone's got their own thing.

How has your final tour been going?

Great. We just finished a leg in Europe. We've met some wonderful people over the years in those territories, so it's been very sad to leave it. 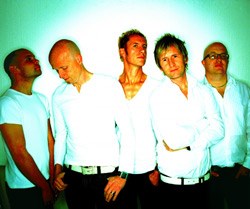