The latest from the Coen brothers brings many of their themes full circle in a tale of woe of nearly biblical proportions. PLUS: The Coens' worldview.
Alissa Wilkinson|October 2, 2009
Our Rating

It is 1967, and Larry Gopnik's got problems. His wife Judith is leaving him for Sy Ableman, a maddeningly self-assured family friend with an impossibly mellifluous voice. His brother Arthur is living with him, spending most of his time scribbling in a notebook and suctioning the sebaceous cyst on his neck. His children are filching money from him: Sarah for a nose job, and Danny for pot and records. A student is either bribing or threatening him over a failing grade. One of his neighbors is encroaching on his property line; the other, Bathsheba-like, is sunbathing naked. And the pesky guy from the record-of-the-month club won't stop calling, insisting Larry pay up on an account he doesn't remember opening.

Until last week, Larry's life was straightforward, comfortable, even pleasant. He's in good health and up for tenure at the Midwestern university at which he teaches physics. His children attend school, more or less. The Gopniks are upstanding members of their local Jewish committee. Danny's bar mitzvah is fast approaching.

Now, as Judith and Sy blithely make living arrangements for everyone, his children ignore him completely, and threatening anonymous letters are being mailed to the tenure committee, Larry's comfortable world is disintegrating, and he simply cannot figure out what to do. He turns for guidance to his rabbis, but their help is cryptic, at best. Is this God's will? What is God trying to tell him? What can he do to appease the Almighty and let things be put to right again? And unfortunately for Larry—who simply wants to be a mensch, a serious man, a good man with a normal life—his woes are far from over.

A Serious Man, it seems, is the most direct that the Coen brothers have been about their idea ... 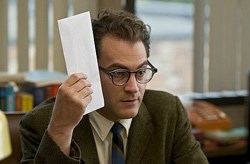