The musical theologian/thinker/experimenter explains why Church Music is the perfect moniker for his band's latest creative output.
Andrew Greer|September 22, 2009

Church Music is full of contemporary expressions. Is the title a tongue-in-cheek remark on the old-school organ hymn renditions many of us grew up hearing?

David Crowder: The music of the church is broad and diverse. All we're doing is stating the obvious—we make church music. It is not a critique of more traditional expressions of music in the church, but rather how the creation of expectation by language can be limiting in ways that divide and confuse, rather than unite and clarify. The fact that those who come from a traditional setting hear this music and think, "this is not church music," and others coming from more progressive settings think, "this is not church music," causes me to think that both expectations should be reevaluated.

How would you define "church music?"

Crowder: Church music is music of the Christian church used for congregational singing. Pliny the Younger, a Roman statesman in the first and second centuries, wrote emperor Trajan asking for advice in how to deal with Christians, of which he'd had little experience with. One thing he uses to define them is, "They sing songs as if to a God." To me, that defines the purpose of Church music.

Church Music encompasses rock, pop, electronic, dance music—a melting pot of genres. What did you grow up listening to?

Crowder: My formative years were spent in the backseat of my dad's Ford Thunderbird playing five tapes in an endless cycle: two Elvis tapes, a Willie Nelson tape, an Olivia Newton John tape, and thankfully, a Bill Gaither tape. When secular music was banned from the house, I circumvented this by listening to Kiss really, really loud at my friend's house, and by explaining to my parents that Queen was in fact a Christian band. 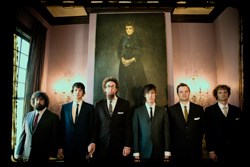