No, not the KJV, but LeBron himself. An interview with Dru Joyce, LeBron James' high school coach and one of the subjects of a new documentary about that amazing team.
Tim Avery|September 29, 2009

But once upon a time the reigning NBA MVP played with high schoolers, and the documentary More Than a Game—which opens in limited release this week—tells the story of how James and his teammates at St. Vincent–St. Mary High School in Akron, Ohio, won a national championship in the midst of LeBron Mania.

The film started out as a 10-minute class project for college student Kristopher Belman, but after several years' worth of follow-up work, it's grown into a feature-length account of the bond between these five young men and their coach, Dru Joyce II.

Joyce first started coaching when he had the chance to coach his son, Dru Joyce III, on the Northeast Ohio Shooting Stars, a traveling youth basketball team. That squad nurtured four of the five future St. Vincent–St. Mary stars featured in More Than a Game—including a prepubescent LeBron James. Coach Joyce was able to rejoin his players midway through their high school careers and, as a first-time high school coach, lead them through the trials and triumphs that followed.

Joyce, who is a Christian, spoke with CT Movies about his experience during and after the making of More Than a Game.

How did you feel about having someone film your team?

Dru Joyce: At the time it was just a class project, so it seemed very innocent, just an opportunity to help out a young guy [Belman] from Akron. So we gave him access even though, because of the celebrity of LeBron and the whole team, we had closed off practices from the media by then.

And Kris was very good. He seemed like he was here more than he was in California [at college], and I wondered ... 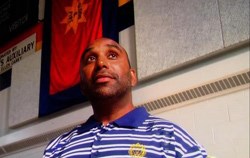