This IMAX documentary about the 2009 maintenance of the Hubble telescope focuses inspires awe with the scenes depicting our universe in glorious detail.
Russ Breimeier|April 23, 2010
Our Rating

"The heavens declare the glory of God; the skies proclaim the work of his hands."—Psalm 19:1

There's an interesting philosophical duality to the subject of space which is briefly touched upon in the new IMAX documentary Hubble 3D. The universe is so "mindbogglingly" large that many believe it is statistically improbable for Earth to be the only happy accident with life on it. Yet most would also accept that Earth's living conditions (atmosphere, proximity to the sun, etc.) are so improbably specialized, it makes our planet truly blessed. We may be a speck in the universe, but we're a unique, beautifully designed speck.

The Hubble Space Telescope was designed to give us a better understanding of the Earth's cosmic context. After its launch in 1990, however, Hubble quickly became a recurring punchline due to a warped mirror that essentially left it nearsighted. A servicing mission in late 1993 corrected the problem, and after some continued tweaking over the years, many scientists now consider Hubble to be one of the most important inventions in human history. The images it delivers are astoundingly detailed, showing us the wonders of our solar system and beyond. Hubble allows us to explore the universe in ways we've never been able to before—without even leaving the comfort of our own home planet.

Hubble 3D gives us a short history of the orbiting telescope over the last twenty years before primarily focusing on the Atlantis space shuttle's mission in May 2009 to realign and upgrade the satellite one last time. Thanks to IMAX's incredible screen size and sound ... 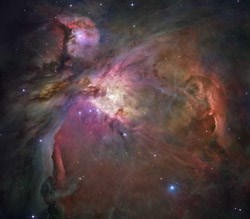