Disneynature's latest big-screen documentary takes you up close and personal with astounding creatures you've never seen before, as well as some old friends worth revisiting.
Steven D. Greydanus|April 22, 2010
Our Rating

Disneynature's debut film, Earth, was a 90-minute sifting of "Planet Earth," the BBC's massive documentary miniseries about life on Earth. Fans of "Planet Earth" and its marine companion series "Blue Planet" might wonder whether Disneynature's new film Oceans was likewise distilled from the latter series. Throw in the fact that "Blue Planet" was made into a film called Deep Blue, narrated for U.S. audiences by Pierce Brosnan, and one could assume that Oceans, also featuring Brosnan's narration, is merely Deep Blue recut.

It's not. In fact, Oceans comes from the other side of the Channel. It's actually a sequel to Jacques Perrin and Jacques Cluzaud's 2001 hit Winged Migration, which insinuated audiences with startling intimacy into the midst of waterbirds in flight. Wider in scope and subject matter, Perrin and Cluzaud's new film is no less breathtakingly up-close and personal with its subjects. An early shot of a marine iguana undulating toward the surface hugs the lizard so closely that I scribbled "iguana-cam!" in my notes. How did they do it?

Nature doc lovers will meet plenty of old friends in Oceans: a mother humpback whale lifting her calf to the surface for a breath of air; newly emerged turtle hatchlings herky-jerking over the expanse of sand toward the sea while swooping frigatebirds pick them off at their leisure; orcas surging alarmingly out of the surf to snatch fur seals from the shallows. (Such scenes of predation are pretty tame; at one point the proximity of orcas and humpbacks made me fear a repeat of the harrowing scenario from Blue Planet of orcas harassing a mother humpback to exhaustion before leaving her calf's half-eaten carcass to sink to the ocean floor—but rest assured that doesn't happen here.) ... 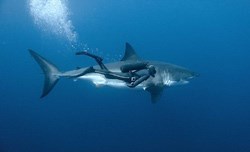