A revenge movie without violence, The Concert swings between slapstick comedy and the uplift of high art.
David Neff|August 6, 2010
Our Rating

The Concert's story line begins believably enough. The Communist Party apparatchik who controls the Soviet Union's prized Bolshoi Orchestra orders symphony conductor Andrei Filipov (Aleksei Guskov) to fire his Jewish and Gypsy musicians. The conductor refuses, and the agent of the all-invasive state lays off all the orchestra's musicians and reassigns the conductor to the role of janitor at the Bolshoi. Russia's legendary anti-Semitism renders the story's initial premise soberly credible.

Several decades later, we find the conductor-turned-janitor on his knees, cleaning the office of the man who had fired him. He hears the fax machine whir as it disgorges an urgent invitation for the Bolshoi to fill a last-minute vacancy at a prominent Paris concert hall. Filipov steals the invitation, rounds up his old musician friends—now driving an ambulance, dealing in black market cell phones, and even dubbing moans and groans for pornographic films—and offers them the chance to play again, as the Bolshoi, before an appreciative Paris audience.

The current orchestra, he tells them, "sounds like mating cats." We are much better, he says.

The Concert (in French and Russian with subtitles) is a rarity—a nonviolent revenge movie. (Compare its lack of carnage, perhaps, to Redford and Newman's 1973 The Sting.) The film's protagonist wields not an assault rifle but a conductor's baton. But he will get back at those who interrupted his search for "ultimate harmony."

These musicians haven't played together for 30 years. Some of them are rusty, and director Radu Mihaileanu shoots this ragtag bunch and their shabby Russian surroundings with a wobbly hand-held camera to emphasize the decay that set in under Communist rule. The Paris ... 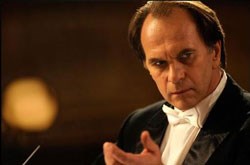