Emma Thompson's magical nanny helps a wartime family in a whimsical sequel that is actually better than the original.
Carolyn Arends|August 20, 2010
Our Rating

Isabel Green is doing the best she can. Her husband is off fighting in the British Army, and it's up to her to corral their three unruly children, manage the struggling family farm, and earn grocery money by working a day job at the town's general store. Once two more youngsters are added to the mix—the Greens' snooty niece and nephew from London—it's clear Isabel has more on her hands than she can handle. When she reaches her wit's end after a particular trying day, every cupboard and tea-pot in the general store comes to life with a clear and emphatic message: "The person you need is Nanny McPhee."

Viewers familiar with the original Nanny McPhee (2006) can guess what happens next. A warty, uni-browed, snaggle-toothed governess—equal parts Mary Poppins, Supernanny, and Ugly Betty—arrives at Isabel's doorstep and informs the harried young mother that the army has sent her to teach the children five important lessons. Isabel's alarm and suspicion quickly turn to gratitude when, within an hour, the nanny has used her magical powers to impart Lesson One: To Stop Fighting. While the children try to determine whether their new caregiver is using wartime secrets to overpower them, a relieved Isabel agrees to let the mysterious nanny continue with her lessons. As the ragtag family deals with the threat of war, a missing father, and the looming loss of the farm, Nanny McPhee progresses quickly from the children's nemesis to their ally in a series of quirky adventures.

As in the original, Nanny McPhee Returns is the brainchild of Emma Thompson, who stars in the title role and wrote the screenplay. (Read our 2006 interview.) Wisely, Thompson stays faithful to the formula that fueled the original Nanny McPhee ... 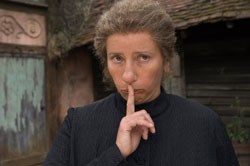