What is the most winsome account of the Christian life you've seen onscreen in the last year? My own answer surprises me: a 30-minute documentary entitled Top Ten Monks, airing December 22 on HBO2.

Set in Stift Heiligenkreuz Abbey, a Cistercian monastery near Vienna, the documentary takes as its point of departure a deliciously incongruous human-interest story of the sort that appears below the fold each day on the front page of The Wall Street Journal. "They rise at 4:30 every morning," the film's publicity sheet begins. "They pray more than six hours a day. They've devoted their lives to God. And they're pop stars." Who could resist such a premise?

The improbable celebrity of the monks of Stift Heiligenkreuz was set in motion when Universal Music in the UK, having noticed an uptick for albums in their back catalogue featuring Gregorian chant, advertised in Catholic publications in search of new material. At the last minute, someone forwarded the ad to Father Karl, the media relations man at the abbey, and he responded, including a YouTube video of the monks singing. Tom Lewis at Universal was bowled over by the video, and before long the monks could be heard on a CD, which ascended the pop charts in Austria, Germany, and Britain, topping the million mark in worldwide sales.

All of this is charming—Father Karl himself is an immensely engaging figure—but also fairly predictable, and I was prepared for beautiful and worshipful music accompanied by a superficial glimpse of monastic life, from the viewpoint of an intrigued but jaded outsider. (Director Dana Perry's credits include the documentaries Sex: The Revolution and The Drug Years; she also directed the widely praised Boy Interrupted.) But Top Ten Monks is far ... 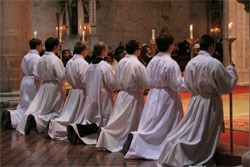