If the Harry Potter movies are a rich and nutritious feast, this mythological romp is more like mac & cheese—tasty and fun, but lacking in much substance.
Todd Hertz|February 12, 2010
Our Rating

When it comes to pre-teen/teen fantasy, the Harry Potter universe is a rare treat of relatable characters, emotional storytelling, exciting adventures, and fairly complex ruminations about life, death and growing up. It's a full feast.

In comparison, the new film Percy Jackson & the Olympians: The Lightning Thief is sort of like macaroni & cheese. And honestly, who doesn't like macaroni & cheese? It's tasty.  But nutritional, decadent, rich, satisfying, and lasting? Maybe not so much. While this new flick may not have Potter's complex world, deeper themes, and multiple layers, it also doesn't have the angst, heaviness and darkness. Instead, it replaces them with one thing in bulk: Fun.

Harry Potter's saga clearly influences Percy's story, but this film is not some cheap rip-off pushed by a studio to rake in money. It's actually an adaptation of author Rick Riordan's No. 1 New York Times bestselling book from 2005 (the final installment of the five-book series, The Last Olympian, came out last spring). The award-winning books were written by a former Greek mythology teacher after reading the sagas of the ancient Greek heroes as bedtime stories to his son. The result is a quickly-paced, action-heavy, exciting movie that melds the Harry Potter series with a dash of National Treasure and a whole bunch of Clash of the Titans. (This film, like the first two Potter flicks, was directed by Chris Columbis.)

Percy Jackson (Logan Lerman) is a normal high-school student who's convinced he's a loser. His learning disabilities and ADHD have him feeling low and discouraged. How can he ever achieve anything? But everything changes during a school field trip. While discussing Greek mythology, an attack by a mythical beast reveals to Percy a ... 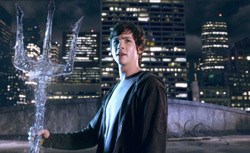