After more than two decades in the business, TobyMac still clings to a quaint old mantra—that a song can still penetrate a heart and soothe the soul.
Mark Moring|February 9, 2010

Toby McKeehan, better known as the rock/rap artist TobyMac, releases his fourth studio album today, Tonight—an album he feels is his most urgent with its messages of hope, redemption, and second chances. "I still believe a song can penetrate a heart," Toby says. "I believe God can use a song to open someone's mind and heart. I still believe that songs matter."

Formerly one-third of the Christian supergroup dc Talk, McKeehan has been flying solo since 2000 when the group went on an extended "hiatus." Fresh off another Grammy nomination—he's won four in the past, but this time he lost to Mary Mary in the Best Gospel Song category (Toby for "City on Our Knees," Mary Mary for "God in Me")—McKeehan spoke with us about his new album, his family, his duets with son "TruDog," and more.

You seem to release an album about every three years. Is that a typical cycle?

It is probably my typical creative cycle, although there are songs on each album that I have been sitting on for a couple years. I usually end up with 30 to 40 songs to choose from, and I always believe the cream rises to the top. Another reason for the delay between records is I am touring the entire time from release to release and rarely slow down to make the record. Unfortunately in the Christian industry it takes a while for everyone to be aware of it. We have to work harder and longer on the road to make people aware of our releases. In other words, we got to "let it stew."

Why's the album called Tonight? Does that capture the overall theme?

When you are a touring artist your entire focus is on the concert that you are about to play. Our prayer and our focus is on what happens that night. My hope is that everyone leaves that arena changed maybe mildly, ... 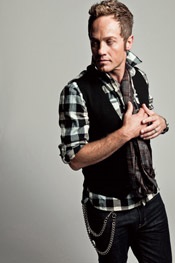