Angelina Jolie plays a CIA agent who might also be a Russian assassin in this enjoyably fast-paced but frustratingly unresolved action thriller.
Russ Breimeier|July 23, 2010
Our Rating

"Who is Salt?" That question drives this movie's marketing campaign and truly does propel the film along for its 100-minute runtime. But you wouldn't be wrong in thinking it sounds like a bit of an identity crisis.

Salt is less a thoughtful political thriller than it is an action vehicle for Angelina Jolie, no slouch when it comes to stunt work (Tomb Raider, Mr. and Mrs. Smith). Think of this film as the feminine version of The Bourne Identity crossed with The Fugitive with a little bit of The Manchurian Candidate thrown in.

The movie opens by introducing us to its namesake character two years ago. CIA operative Evelyn Salt (Jolie) is captured, interrogated, and tortured by soldiers in North Korea, but eventually released thanks to the efforts of her colleague Ted Winter (Liev Schreiber) and her soon-to-be husband Mike Krause (August Diehl).

Cut to the present day. Salt is about to head home and celebrate her wedding anniversary when a mysterious Russian named Orlov (Daniel Olbrychski) turns himself in, asking to defect. During his interrogation, Orlov reveals to Salt that the Russian government had a secret training program for sleeper agents (beginning with Lee Harvey Oswald), creating assassin-spies from a young age to infiltrate the U.S. government. He then drops the biggest bombshell: That Salt is also one of these spies, with plans to kill the Russian President during his visit to the United States the next day.

Surely Orlov is lying, except tests show he's telling the truth; moments later he escapes. Salt says she's innocent—yet too proceeds to break out of headquarters and become a fugitive. We soon learn that Salt is cut from the same cloth as James Bond and Jason Bourne—a killer skilled in several forms ... 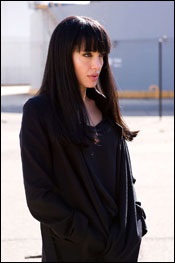