Overly violent and unaccomplished on all fronts, this disaster may end up being one of the worst films of the year.
David Roark|June 18, 2010
Our Rating

"Revenge gets ugly." That's the tagline for director Jimmy Hayward's new blockbuster disaster, Jonah Hex, which is based on a 1970s comic book series. The titular antihero, whose face is horribly scarred, is the only the first of many ugly things about the movie. There's also the disgusting snake man, and then the really hideous stuff, like Megan Fox's acting, the absence of narrative, the exploitation of violence, an overabundance of loud and fast action sequences, and, ultimately, the glorification of vengeance.

Jonah Hex doesn't have much of a story. Through a mildly creative opener and distracting flashbacks, we get a vague understanding of the backstory. The rest of the film is made up of a mindless, frenetic, and banal revenge plot—mainly of the title character trying to hunt down the man who killed his family.

The protagonist, Jonah Hex (Josh Brolin), is a disgruntled Civil War veteran who fought for the South not because he agreed with the army's ideologies, such as slavery, but because he opposed the American government. A skilled and fearless gunslinger, he quickly became a war hero, notorious for taking down hundreds of enemies all by his lonesome. But when his commanding officer, Quentin Turnbull (John Malkovich), grew heartless and started murdering innocent people—women and children—Hex had had enough.

When Turnbull's son Jed dies, he blames Hex, who winds up in the hands of Turnbull and his men, including Burke (Michael Fassbender), a psychopathic Irishman with a bowler hat and tattoos. The stone cold soldiers murder Hex's wife and son right before his eyes and mutilate the right side of Hex's face with a branding iron so that, according to Turnbull, he'll never forget that day. 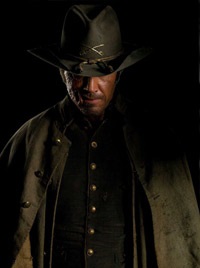