A young woman vacationing in Italy finds a love-letter written 50 years before, and assists the now-elderly widow who wrote it to find her one-time love.
Frederica Mathewes-GreenMay 14, 2010
Our Rating

This is the dilemma of movie reviewing: a critic who has honed professional discernment by studying the cinematic arts will not be as generous toward a film as a happy audience that is just looking for a good time. When I picked up my daughter for the screening, I said, "I don't know why I wanted to review this; it looks awful."

That opinion did not change—but while Meg and I were rolling our eyes and whispering witty critiques, hundreds of people around us, who had filled every seat in the theater, were having a ball. They laughed, they sighed, they cheered, they grew thoughtfully silent approximately 30 seconds after Meg whispered to me, "Now something devastating is going to happen."

But in this particular case there's a mystery, too. Why did so many people turn out for this screening? Would every age and race in Baltimore turn out just for elegant, British septuagenarian Vanessa Redgrave? It doesn't seem like the other two leads, Amanda Seyfried and Christopher Egan, have enough star power to account for this. The film promised no fights, sex, or special effects. So what was the draw?

The story concerns Sophie (Seyfried), a fact-checker at the New Yorker who dreams of being a writer. She is on her way to Italy for a "pre-honeymoon" with her boyfriend, Victor; it's "pre" because, just days after the wedding, Victor is going to open a restaurant. But we don't see much of Victor, and that's a shame because he would have been an interesting main character. It's not that the character is all that well-written, but that Gael Garcia Bernal (Y Tu Mama Tambien, The Science of Sleep) brings an eye-catching manic, ditzy quality to his portrayal of this passionate foodie. Bernal steals the scene whenever he's onscreen, which, ...

Join in on Facebook
Tags:
Film
Posted:
May 14, 2010
More From:
Frederica Mathewes-Green 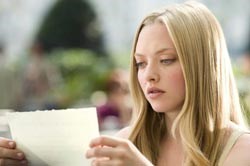