How and why Michael Gerson believes Christians should not abandon the public square.
Sarah Pulliam BaileyOctober 29, 2010
Image: Walter Calahan
This article is from the November 2010 issue. Subscribers can read all of CT's digital archives.

Christians' retreat from American politics would be a mistake, argues Michael Gerson, against those who prefer more behind-the-scenes forms of cultural engagement. As President George W. Bush's speechwriter for five years, and now as senior research fellow at the Institute for Global Engagement, Gerson has seen first-hand how policy has tangible cultural effects. Gerson recently co-authored City of Man: Religion and Politics in a New Era (Moody) with Peter Wehner and began a one-year fellowship with the ONE Campaign, the Bono-backed nonprofit devoted to funding international aid programs. Gerson will be working on the campaign's religious and conservative coalition on development, disease, and trade issues. "I am not, however, in charge of distributing U2 tickets," he says.

Gerson spoke with CT online editor Sarah Pulliam Bailey about why Christians should remain vigorously engaged in the political sphere.

You gently critique the Religious Right, saying, "The biggest problem with the Religious Right has not been tonal or strategic but rather theological." Could you flesh that out? How might Christians approach politics differently?

We are in a moment of transition. There's a discontent with an older model of social engagement. One reason is tonal. The Religious Right reacted to the aggressions of modernity, to the impression that leading institutions were imposing an alien vision on American society. Its fundraising appeals presented politics through the prism of a bitter divide. It was the children of light against the children of darkness.

Another element is political and strategic. Because it brought many moral concerns to public life, the Religious Right became an appendage ... 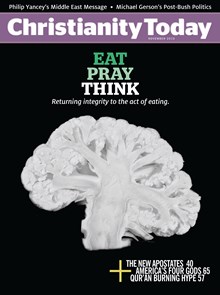