With their fourth holiday album in 11 years, Point of Grace is in the Christmas spirit. We talked to Leigh Cappillino about their latest.
Mark Moring|November 2, 2010

It's been 19 years since Point of Grace formed as college friends at Ouachita Baptist University. Since then, they've gone on to sell more than 6 million albums, earn 24 No. 1 singles, win numerous Dove Awards and a pair of Grammy nominations. But little gets these women jazzed up more than Christmas and making holiday albums. With the recent release of Home for the Holidays, the group has now released four yule projects in 11 years—A Christmas Story (1999), Winter Wonderland (2005), Tennessee Christmas (2008), and now this. Tennessee Christmas was essentially a re-release of songs from the previous two albums, plus one new song, but you get the point.

The group has seen some personnel changes over the decades. Two of the original four—Terry Jones and Heather Payne—left in 2003 and 2008, respectively, to spend more time with their families. Leigh Cappillino joined the group in 2004, and the group, including originals Shelley Breen and Denise Jones, is now a trio.

We recently caught up with Cappillino to talk about the new Christmas album, the song selection, and why the group has such staying power after all these years.

Why another Christmas album?

For us, Christmastime is when we're at our best. We do our longest tour, for several weeks. The rest of the year we do little legs—two days here, three days there. But Christmas is when we pull out all the stops, bells and whistles. It's an opportunity for our vocals to really shine. Also, the fact that we're three girls now [instead of four], and we're older, and there is a new sound. We wanted a more acoustic driven, Americana feel of a Christmas record. It's different from any of the Christmas records we've done in the past, where we had such big, slick ... 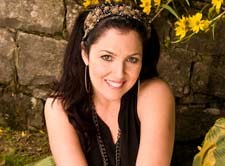