Get ready for more of Sarah Palin in the coming weeks. The former governor of Alaska will continue to find herself in the spotlight as Sarah Palin's Alaska, an eight-part series, premieres Sunday at 9/8c. The TLC show takes us behind the scenes of the Palin household, highlighting the quirky political family and Alaska's stunning natural beauty.

Promising to be a frontier-filled show, we see previews of the Palins rock climbing, fishing, white water rafting, dog sledding, and flying. "How come we can't ever be satisfied with tranquility and serenity?" she says, just before the camera zooms in on her firing her gun. Sitting on a mountain, she says, "You can see Russia from here … almost," with a cheeky grin.

The show opens in the Palins' home where Sarah is making cupcakes with 9-year-old Piper, who licks her way around the bowl of batter. "What else, Sarah?" Piper asks her mom. Sarah explains that calling her by her first name is Piper's way of getting her attention. Like she did during the 2008 presidential campaign at times, Piper occasionally steals the show. "My mom is super busy; she is addicted to the BlackBerry." Mimicking her mother's thumb typing, she says, "She's like, 'Hold on Piper, I'll be there in a second.'"

Sarah and huband Todd complain about Joe McGinniss, a writer working on an unauthorized biography of Palin, who rented the house next door. Todd says "our summer has kind of been taken away from us." Todd and friends put up a 14-foot-high fence. "I thought that was a good example, what we just did," says Sarah. "Others could look at it and say, 'Oh, this is what we need to do to secure our nation's border.'"

As if it's an average day in Alaska, a "mamma grizzly" appears while the Palins fish near the ... 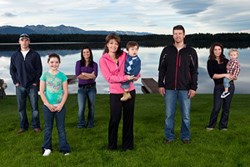