An inspiring film about history's top racehorse—and the woman behind him. PLUS: Interview with director Randall Wallace.
Camerin Courtney|October 8, 2010
Our Rating

Seeing a movie about a historical event is kind of like going on a date with a good friend. Some of the tension and mystery are gone, replaced by a familiarity that can be either heart-warming or ho-hum. It all depends on the chemistry.

In the movie world, this means that we viewers need something fresh to make up for the fact that we know the Titanic sank, the astronauts survived, the horse won—an unknown backstory, engaging characters, compelling storytelling, a ginormous James Cameron production. Something to make the story worth revisiting.

Even if you aren't old enough to have seen racehorse Secretariat grace the covers of three magazines—Time, Newsweek, and Sports Illustrated—in 1973 after becoming the first U.S. Triple Crown champion in 25 years, I'm surely not spoiling anything here by saying that this is a movie about a remarkable horse that wins races against all odds.

So what's the fresh angle here? Mostly it's Secretariat's owner, Penny Chenery (Diane Lane), a housewife who inherits the horse after both of her aging parents die in a short span of time. A mom of four busy kids, Penny is an unlikely candidate for the racing world—especially in the early 1970s when that industry was still dominated by men.

Drawing on idyllic childhood memories with her champion-horse-breeding father, and her pluck as a soccer mom (before such a term really existed), Penny dives into the racing world. Her brother wants to sell the family horse farm to cover all the property taxes; her husband wants her at home more (they live in Colorado; the farm is in Virginia); and her stable manager, thinking she's a silly ignoramus, tries to swindle her out of lots of money by attempting to sell some of the better horses ... 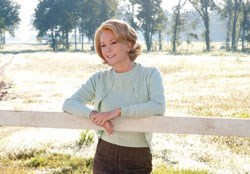