Though its heart is in the right place, this banal comedy wastes its talented cast.
David Roark|September 24, 2010
Our Rating

You Again, a family affair by director Andy Fickman, is what some moviegoers would call "cute." But I'd call it ridiculous, predictable and cheesy—everything you might expect from a PG comedy about letting go of the past. But with a cast featuring veterans like Jamie Lee Curtis, Sigourney Weaver and Betty White, Fickman's latest could have actually been funny had it made use of its talent.  Instead, its script, written by first-timer Moe Jelline, relies on hackneyed themes and plot devices that make it sometimes entertaining but utterly forgettable.

The protagonist is Marni (Kristen Bell), a Los Angeles PR executive who used to be the laughingstock of her high school, when she had pimples, braces, and a bad haircut. Schoolmates called her "Moo" and made cow noises when she walked down the hall, because her initials just so happened to be M.O.O. But now that's all changed. Marni is a new person. She's pretty, confident, and making headway in corporate America—and not looking back.

That is, until she gets a phone call from her mother, Gail (Curtis), with what could very well be the worst news of her life: In a few days, her brother Will is marrying Joanna (Odette Yustman), who turns out to be J.J., the former cheerleading captain who single-handedly ruined her teenage life. In flashbacks, Joanna is shown locking Marni out of the school in one scene, and shoving her into Will during a basketball game in another, causing him to miss the game-winning shot.

In the present day, Marni tries her best to be an adult, hoping for an apology or to talk things over. But when Joanna puts on a front and pretends they've never met, Marni is outraged and declares war on her future sister-in-law, and even makes plans to stop the wedding. ... 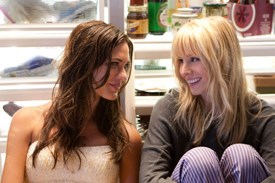