This sometimes clever remake of the 1985 horror/comedy is undermined by its crassness.
Russ Breimeier|August 19, 2011
Our Rating

The original Fright Night, a moderate hit in 1985 and a horror movie classic, was a clever mash-up of scares and laughs—like Alfred Hitchcock's Rear Window with a vampire twist. If it weren't for the violence, the "my neighbor is a vampire" plot could play like the whimsical premise of some kid-friendly Halloween story.

With Hollywood intent on remaking '80s movies these days—The Karate Kid, Red Dawn, Footloose, and Dirty Dancing, for starters—it's no surprise that Fright Night gets a makeover. Aside from a clever script and some excellently creepy makeup effects, the movie hasn't aged well. And after recent reboots of Friday the 13th and A Nightmare on Elm Street, why not make a more fun and intelligent horror film?

The characters and plot essentials remain the same. Charley Brewster (Anton Yelchin from 2009's Star Trek) is the teenage son of single mom Jane (Toni Collette) and the boyfriend of local beauty Amy (Imogen Poots). His nerdy friend Ed (Christopher Mintz-Plasse) calls attention to recent disappearances at school and offers an unexpected conclusion: Charley's new next-door neighbor Jerry Dandridge (Colin Farrell) is a vampire and he's feeding on others in their town.

At first Charley dismisses the theory. But then Ed disappears and Charley begins to notice weird happenings around his neighbor's house. When no one else believes you, whom do you call for help? Why, Peter Vincent, vampire hunter, of course.

This is where things deviate from the original, which took place in generic suburbia. This one occurs somewhere just outside of Las Vegas, and even feels like a decadent Sin City version of Fright Night. It's enough to make you wish for a more "innocent" Fright Night—one that doesn't need to ... 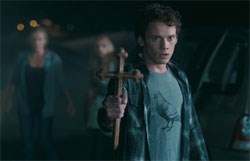