It seems that Sherlock Holmes never goes out of style or out of season. I posted on Facebook that I was on my way to the press screening for Sherlock Holmes: Game of Shadows, and was met with several friends telling me that a particular Holmes movie or mini-series was simply a must-see. And I'm sure they were all right: I find it hard to believe that Sir Arthur Conan Doyle's most cherished character will ever run out of ways in which to enthrall us.

Which is not to say that I think every Holmes is created equal, or that there haven't been some bad ones. More and more, one realizes that each new Holmes is as much a reflection of its interpreter's style and sensibility as he is Doyle's original vision, perhaps more so. There's nothing wrong with that. The current BBC incarnation is set in the modern world, which I have no problem with. Guy Ritchie's film adaptations (the first one released in 2009) are not modern, but are certainly obsessed with technology. They are stylish, action-packed, and fall just short of resembling steampunk. In theory, I have no problem with any of that, either.

But I'd be lying if I said I was wild about it. The new Ritchie project again stars Robert Downey Jr. as Holmes and Jude Law as Watson, and features Stephen Fry as Holmes' brother Mycroft, Mad Men's Jared Harris as the villainous Moriarty, and Noomi Rapace as a gypsy girl who falls in with the wrong crowd. Rachel McAdams, the love interest from the first movie, appears in what's basically a cameo.

This Holmes is pitch-perfect in its continuation of the first movie's tropes—that is, it's stylish and places Sherlock as a bit more of an action star/kung-fu warrior than a detective. The music, the cinematography, even the end credits motif ... 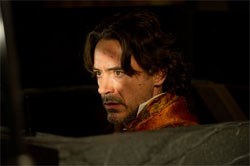