There's a moment in director Cameron Crowe's We Bought a Zoo that's indicative of the whole. A character asks a man why he—with no experience with animals or with running a business—bought a failed zoo. His flippant answer: "Why not?" It is clichéd and tired dialogue. But it works because it's delivered by Matt Damon with a deep, glowing satisfaction as if he just discovered something about himself. It's a smirk that suggests he just told himself a joke, or that there's something deeper to these two words. This ho-hum screenwriting works because Damon makes it work.

The same could be said for the movie overall. Damon—along with the acting of the core cast—holds together a disjointed movie that's not sure if it wants to be whimsical fantasy or poignant realism. It cycles between goofy, mass-appeal family comedy and more mature, personal drama exploring classic Crowe (Almost Famous, Jerry Maguire, Say Anything) themes of grief, finding oneself, growing up and moving on. It is two movies mashed into one. As such, some aspects don't work. Still, the movie stays enjoyable thanks to the acting and genuine heart.

Damon plays Benjamin Mee, a newspaper writer addicted to danger and adventure—but not quite ready for his newest journey. When his beloved wife dies of illness, Benjamin is now the single dad of two: 14-year-old Dylan (Colin Ford) and 7-year-old Rosie (adorable Maggie Elizabeth Jones). All three need a new start. It comes in the form of a new house, which just so happens to have a rundown zoo in the backyard. With Benjamin's brother Duncan (a very likable and grounded Thomas Hayden Church), the young zookeeper Kelly (a strong and dynamic Scarlett Johansson) and a small staff, the Mees ... 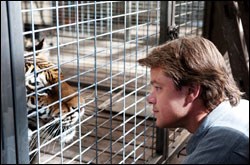