Joy in the Midst of Terror

How Andrew White's Baghdad congregation brings God's love to a war-torn land.
Interview by Joe CarterJuly 28, 2011
This article is from the July 2011 issue. Subscribers can read all of CT's digital archives.

Nicknamed the "Vicar of Baghdad," the Reverend Canon Andrew White oversees one of the most dangerous parishes on earth. During Easter weekend of 2010, he secretly baptized 13 adults, most of whom were dead within a week. Despite frequent kidnappings and killings in his church, White gives thanks for St. George's, the only Anglican congregation in Iraq.

First Things online editor Joe Carter recently spoke with White, author of Faith Under Fire: What the Middle East Conflict Has Taught Me about God (Monarch), about the persecution of Iraqi Christians, the struggle of ministering in a war zone, and the lessons learned from suffering from multiple sclerosis.

You have concerns that most pastors can't begin to fathom. How does working under such extraordinary conditions affect ordinary ministry?

So many of our brothers and sisters here in Baghdad have been killed, kidnapped, or tortured even in the last few months. Members of my staff have also been killed. Just this morning, I was trying to sort out post-hospital care for our former chief of security, who recently had a leg blown off.

We cope because the Lord is always with us. When you are where the Lord wants you to be, he always enables you to cope. Look at Daniel. He had not planned to come into exile in Babylon under Nebuchadnezzar. God still provided him with all that he required. He had not intended to be an interpreter of dreams, but God gave him the knowledge to do all that he needed and enabled him to serve with joy.

In the same way, I had no intention of coming to Iraq. But God brought me here 13 years ago, and now there is nowhere in the world I would rather be. Even in the midst of terror and persecution, we have the joy of the Lord.

Joy in the Midst of Terror 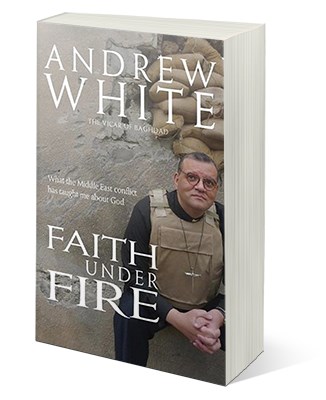 Joy in the Midst of Terror
expand
hide this