Does giving your child a biblical name enhance the child's spiritual development?
March 16, 2011

In mid-January, newspapers announced that Pope Benedict XVI had "declared war" on baby name trends, "railing" against secular, celebrity-inspired names. The key quote: "Do not give your children names that are not in the Christian calendar." As is often the case, the pope said no such thing and spoke simply on baptism as a sign of new birth in the church. But the discussion was launched anyway: Does giving your child a biblical name enhance the child's spiritual development? Does it matter what we name our children?

The Science of Names

A series of psychological studies have found that names do matter: we subconsciously stereotype and form expectations of our peers and co-workers based on their first names. "I wouldn't overestimate the impact of names, but [they] are an important part of first impressions," Ohio University's James Bruning said about one of his many reports. He noted that parents often indirectly choose names for their children that reflect expectations that are reinforced throughout the child's development.

But a 2004 study in the Journal for the Scientific Study of Religion found that "religious commitment is unrelated to [parents'] selection of prominent biblical names." Biblical names are no more common among frequent church attendees, for example, than among infrequent attendees.

Nor are they significantly more common among evangelicals than among mainliners or Catholics.

"Naming can have considerable significance when the parents and the church are intentional about what that name conveys, and celebrate it regularly. There's something powerful when someone knows your name, which is why we must take time to learn them."

Scottie May, author, Listening to Children on the Spiritual Journey

"Biblical names or names from Christian tradition can help children see that their own names and stories are deeply tied to the people and metanarratives of the Bible and the church. But no matter what a child's name, everyone's is connected to the larger story of God's ongoing love for us."

"Peers often will twist names into something embarrassing. But reactions may also give children an ideal to live up to. I doubt a biblical name in itself is likely to enhance spiritual development. Other than momentary envy at my siblings' biblical names, I don't think it shaped my own spirituality."

"To me, the letters of a child's name matter less than the condition of his heart and the content of his character. In today's world, unfortunately, I believe many children face more challenges from labels based on their last names and the names of their street, city, and/or school." 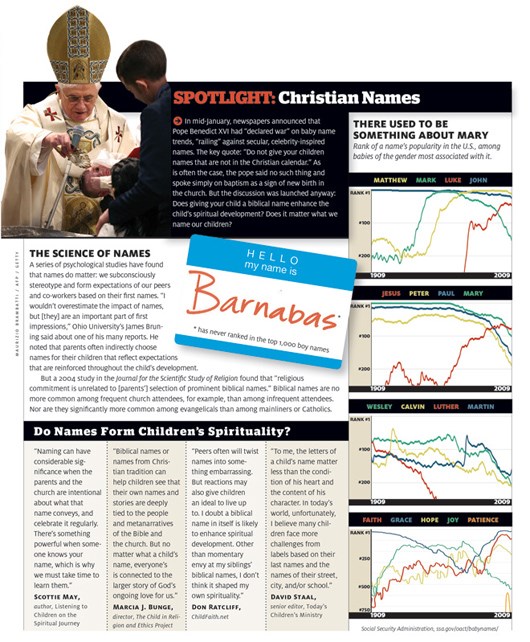 The Social Security Administration has much more data on popular baby names in the U.S. over time.

Previous articles related to family and children include:

Be Fruitful and Multiply? | Observers weigh in on whether Christians have a special responsibility to have children. (July 26, 2010)

The Myth of the Perfect Parent | Why the best parenting techniques don't produce Christian children. (January 8, 2010)