When budding film director Tom Shadyac hired a relatively unknown Jim Carrey in 1994 to make a silly movie called Ace Ventura: Pet Detective, the careers of both men exploded—and so did their bank accounts. Shadyac, who went on to direct The Nutty Professor, Liar Liar, Patch Adams, Bruce Almighty and Evan Almighty—several of them morality tales that reflected Shadyac's spiritual beliefs—dove right into the lifestyles of the rich and famous with huge Hollywood homes and expensive cars.

As often happens, it wasn't long before Shadyac discovered that wealth and the accumulation of stuff didn't buy happiness. It hit him especially hard on his last mansion upgrade when, after the movers left and he was standing in the foyer all alone, he had what he calls a spiritual epiphany: Materialism isn't working.

Shadyac heard but ignored that small voice inside for a few more years until a 2007 bike accident left him with a concussion and then post-concussion syndrome, where he suffered migraine headaches, a constant ringing in his head, and severe mood swings. When he was depressed, he even wanted to die: "I was done," he said. He wondered, "If I were to die, what did I want to say to the world before I left?"

Eventually, Shadyac turned a corner in his recovery, and in doing so, re-evaluated his life and priorities. He embarking on a quest for the answers to two questions: "What's wrong with the world?" And, "What can I do about it?" He grabbed a small film crew and traveled the world in search of the answers, then turned all that footage into a new documentary called I Am, now showing in limited theaters. (Our review will post Friday, March 25.)

We talked to Shadyac (whom we also interviewed when Evan Almighty released ... 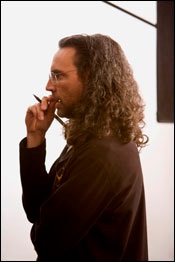