Should Faith Healing be Legally Protected?

Observers weigh in on homicide charges for parents who choose faith healing rather than medical care for their children.
Compiled by Ruth MoonMay 11, 2011
This article is from the May 2011 issue. Subscribers can read all of CT's digital archives.

"Laws like this raise the question: Whose authority should be final, and when? Governments are responsible to God to protect citizens, and yet citizens themselves are responsible to God. What happens when a citizen is convinced God will heal, but the government is sure that faith healing will instead cause harm or death? If a child is involved, unable to make his or her own decision, the case for the government to step in is stronger. But there is every reason to be wary, given that our governments are increasingly less respectful of religious freedom—less inclined to respect homeschooling, the nurse who objects to abortions, Bible studies in homes, and adoption agencies that insist on placing children with mother-father families."

"To some extent or another it is the responsibility of government to watch out for its most defenseless citizens, so there is some way in which the government has to say, 'At this point we have to watch out for this child.' But that's a scary and slippery slope, because you don't know where that ends. What if they say, 'We have to look out for this child and it's wrong to take them to church'? The government is already on slippery ground—confused and conflicted ground within itself—because we have a bizarre paradox: the government says we won't protect ...

Should Faith Healing be Legally Protected?

Should Faith Healing be Legally Protected?
expand
hide this 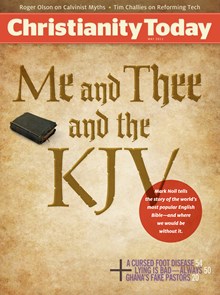 This article is from the May 2011 print issue. Subscribe to continue reading.