Oy, matey. The fourth installment is easier to follow, but it's not clear you'll want to.
Lisa Ann Cockrel| May 19, 2011
Our Rating

Despite the ponderous spectacles that were Pirates of the Caribbean 2 and 3, I was looking forward to my fourth date with Jack Sparrow at the cineplex. And I don't think I'm alone. I would wager that many moviegoers who turn out for Pirates of the Caribbean: On Stranger Tides will not do so because their imaginations are so stirred by nautical adventures, but to see Johnny Depp's Captain Jack. And so they will only be mildly disappointed in this lackluster effort at blockbuster moviemaking.

Rare is the character who can engender devotion while helming such a tedious franchise. The Pirates series has failed to generate a satisfying and coherent plot since its debut installment in 2003. And yet, Jack Sparrow remains one of the wittiest and most endearing antiheroes to put on eyeliner and swish across the deck of a schooner. If Pirates 4 had more swishing and less swashbuckling, it would have made for a more enjoyable movie. And this comes from someone who loves adrenaline-pumping chase scenes and creative spectacles. But I knew this two-hour cruise was in trouble when I found myself resisting the urge to check my email halfway through Jack's first big escape. Much like Dame Judi Dench exclaimed in her delicious cameo, I found myself thinking, Is that all?

This time around, Jack gets himself mixed up in a race to find the Fountain of Youth. Tricked and conscripted by a jilted lover Angelica (Penelope Cruz), Jack is forced to guide the dreaded pirate Blackbeard's ship and crew to the fountain. That Blackbeard (Ian McShane) is Angelica's father and it is prophesied he will soon die explains much of her desire to find the fountain. The other two teams racing to the site—the British and the Spanish—are motivated by religion, ... 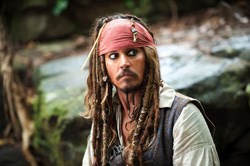