Lucas Black once turned down a movie role because the director wanted him to drop his thick Southern accent—he grew up in Alabama—and use a less distinctive dialect. This is a self-described "country boy" who not only sticks to his drawl, but to his principles.

Black, 28, grew up in the Southern Baptist Church, and takes his faith seriously. Which is why he's attracted to movies like Seven Days in Utopia, which opens in theaters nationwide tomorrow.

Based on the Zondervan book of the same title, Utopia stars Black as Luke Chisolm, a young golf pro with a hot game and a hotter temper. When Luke's anger leads to a meltdown in a tournament, he drives off in a huff and ends up running off the road in the small town of Utopia, where he meets an old cowboy played by Robert Duvall. Duvall's character, who happens to be a former golf pro, takes Luke under his wing and teaches him a thing or two about the game—and about life.

It is Black's third film with Duvall—he had a role in 1996's Sling Blade, but more recently, has starred opposite the Academy Award winner in 2010's excellent Get Low and now in Utopia. The young actor couldn't resist this last role, not only for the chance to work with Duvall again, but because of his prowess for golf—he shoots in the low 70s and hopes to play professionally some day—and because of the movie's faith-based themes. It was, for Black, a perfect fit.

Why did you want to do this movie?

I'm an avid golfer, first of all. When I'm not acting, I'm playing golf. I'm pretty passionate about it. I've been playing in amateur tournaments for the past five years. Also, I read the book about three years before they wrote the script, and I fell in love with the story and thought ... 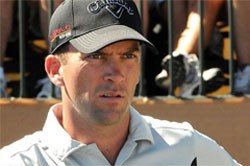