Joseph Gordon-Levitt is a bike messenger in an action movie that's only remarkable for how bad it is.
Josh HurstAugust 24, 2012
Our Rating

It's a familiar TV and movie trope: The first thing we see is a big, climactic moment—a scene of the protagonist in peril, perhaps. How did this happen? How can our hero possibly expect to get out of this mess? What's going on? To answer those questions, of course, the film must rewind the clocks, and, through a lengthy flashback, show us how the story got from Point A to Point B.

When it's done well, this little bit of narrative sleight-of-hand can be an effective tool for showing us how high the stakes, and how thick the suspense. It is not done well in Premium Rush, the new action movie about NYC bicycle messengers. The first thing we see is our hero—Joseph Gordon-Levitt—flying from his bike onto the asphalt ground, presumably after some sort of accident.

When he hits the ground, there is a doozy of a gash on his forearm, but his eyes are open, he's moving around, and his condition is clearly not critical. So is the movie really just the story of . . . how he scraped his arm?

This is not the movie's first red flag; before any images appear on the screen, we hear the opening chords of a familiar Who song, one that has been used to decent dramatic effect on episodes of House and CSI. When something is a cliché on network television, it's probably going to be trite in a motion picture, as well.

The opening salvo is also not the worst part of Premium Rush—but here's the thing: This is not a train wreck of a movie, so transcendently tasteless or misguided that the viewer just can't help but look away. It is also not the kind of movie where there is one big problem—a badly cast actor, maybe, or a cliché-ridden script—that comes to define ... 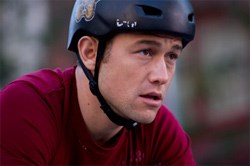