It's been 10 years since Natalie LaRue released her last record as 50 percent of LaRue, the popular duo she formed with her singer-songwriter brother, Phillip. Now a wife and mother of three—Noah, 7, Ella, 5, and Viola, 1—Natalie has recently released her first solo EP, Even Now.

CT's Andrew Greer caught up with LaRue to talk about the decade since LaRue disbanded, what's been going on in her life—including a brush with death when Noah was born—and, of course, what she's writing and singing about on the new album.

LaRue was pretty popular when you disbanded in 2003. Why did you and Phillip call it quits?

Ten years ago, while playing a festival in England I met my husband, Rob. He is from South Africa, so he packed up and shipped to America to pursue me. We were engaged five months later. Then he accepted a youth pastor position in San Clemente, California, and we just started living life. I didn't expect to marry or have kids until I was much older, so marriage radically changed my perception of career.

Phillip married the same year and we decided to take a break from LaRue to enjoy being newlyweds. The break felt really good, which was a good thing because I got pregnant with my son about ten months after Rob and I married. I was slightly devastated. [Laughs] I was not planning on becoming a mom that soon. Becoming a wife and mom revolutionized me, a total identity shift. I became content with devoting my services to raising kids at home. Nine years and three kids later, here I am.

You say marriage and family "revolutionized" you. How?

By 19, I had visited over twenty countries and was established in my identity as a musician and a performer. I had my future mapped out and it didn't include marriage and ... 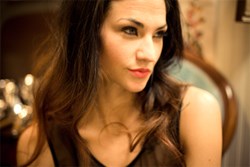