Rock of Ages, the movie adaptation of a Broadway '80s rock musical, has one—and only one—good thing going for it: Tom Cruise as eccentric rock god Stacee Jaxx. Otherwise, the film stands out only for the grand disparity between its best scenes—those with Cruise—and the rest of its bland, uneven proceedings.

Cruise steals the film—as he did as movie mogul Les Grossman in 2008's Tropic Thunder. There's a palpable difference in the film's quality when Stacee is onscreen, thanks to Cruise's engaging performance, full of aloof detachment and on-stage rawk power. Stacee is by far the richest character, has two of the best musical numbers, and supplies most of the fun. He's the only interesting thing in the film. And did I mention he has a feisty baboon sidekick named Hey-Man?

Unfortunately, the baboon himself could stand above most of the movie—except for the scenes with Cruise. Rock of Ages is essentially a series of so-so 1980s music videos strung together by what could pass as weak Saturday Night Live skits or sappy teen-movie moments.

Set in 1987 Los Angeles—and featuring the music of Poison, Warrant, Def Leppard, Bon Jovi, Journey, and more—the movie centers on a seedy rock venue called the The Bourbon Room. Within its walls, three stories develop. A young barman (Drew Boley) and a waitress (Julianne Hough) fall in love—despite the alluring promise of fame trying to pull them apart. Jaxx, who got his start in the Bourbon Room, is on the verge of going solo. And Bourbon Room owner Dennis (Alec Baldwin) and right-hand man Lonny (Russell Brand) fight to keep the joint open despite protests from Christians over this evil brand of music.

This religious element was added for this ... 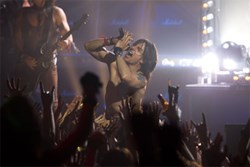