"This Land Is Your Land," Woody Guthrie's most famous song, has been sung by school children, scouts, church choirs, and war veterans. Its message of freedom and hope make it quintessential Woody. So does its undercurrent of protest and equality.

Guthrie wrote the song in 1940 as an angry response to Irving Berlin's popular "God Bless America." If God blessed America, why were there so many poor and downtrodden people littered across its land, still reeling from the Great Depression and Dust Bowl devastation? His original handwritten lyric closed the song with "One bright sunny morning in the shadow of the steeple / By the relief office I saw my people / As they stood hungry, I stood there wondering if / God blessed America for me." Below the lyrics he wrote, "All you can write is what you see." (Read the complete lyrics here.)

Woodrow Wilson Guthrie was simple and earthy, political and spiritual. His music was infused with God and country and the humanity in between, especially the downtrodden and oppressed. Those were Guthrie's people: the hobos and migrants and laborers and union organizers. The weather-worn Okie minstrel was one of them. He was their voice for justice and dignity in the 1930s and '40s.

He was also arguably the most important figure in American folk music. Pete Seeger? Guthrie was a mentor, collaborator and bandmate in The Almanacs during the '40s. Arlo Guthrie? Woody was his father. Bob Dylan? Guthrie was his hero. It was a pilgrimage to visit the seriously ill Guthrie that brought the 19-year-old Dylan to New York City—and Woody's circle of musician friends who helped open doors into the performance scene ... 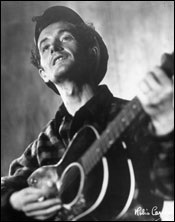