Does Muslim law have a place in the American landscape?
John Witte Jr.November 20, 2012
Image: Andreas Kermann/ iStock
Shari'ah's Uphill Climb
This article is from the November 2012 issue. Subscribers can read all of CT's digital archives.

A constitutional battle over Muslim family law has begun. In November 2010, Oklahoma voters approved a state constitutional amendment banning the use of Muslim Shari'ah and other international laws in its state courts. This was a direct rejoinder to other Western nations allowing Muslim citizens to enforce Muslim marriage contracts in state courts and to resolve family law issues before Shari'ah tribunals without state interference. Oklahoma's citizens wanted none of it, and they voted to ban the use of Shari'ah altogether. Twelve other states are discussing comparable measures.

In January 2012, however, a federal appeals court upheld a lower federal court injunction of Oklahoma's amendment. Singling out a specific religious law for special prohibition, the court of appeals concluded, violated the First Amendment Establishment Clause and unjustifiably injured Oklahoma's Muslim citizens. This leaves Oklahoma courts with a stark choice: allow Muslims to use Shari'ah to govern internal religious affairs and the private lives of voluntary members, or equally prohibit all religious groups from exercising comparable authority through organs of internal mediation, ecclesiastical discipline, and canon law.

Oklahoma can likely escape this choice by crafting a more neutrally-phrased constitutional amendment. But deft legal drafting will not end the matter. As American Muslims grow stronger and anti-Muslim sentiment in America goes deeper, constitutional and cultural battles over Muslim laws and tribunals will likely escalate.

Many Shari'ah advocates reject America's sexual revolution of the past half century, built on cultural and constitutional ideals of sexual privacy, equality, and autonomy. ... 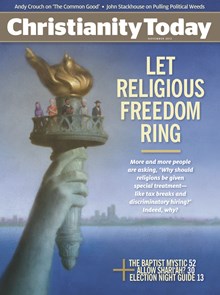 This article is from the November 2012 print issue. Subscribe to continue reading.