The Northern Irishman has been singing into the mystic—and of the divine—for decades.
Andy Whitman|October 2, 2012

Van Morrison has a new album, Born to Sing: No Plan B. Virtually no one will care, a fact that continues to mystify me as much as the man himself. It is, like the preceding 34 albums, a mix of soulful R&B, jazz, Irish mysticism, and ruminations on love carnal and divine. And, like those other albums, it is wholly original and eccentric, an album that could only have emerged from the fertile mind of Van Morrison.

Those of you who know Morrison casually, who think of him only as the soulful singer of "Moondance" or "Brown Eyed Girl," may be surprised by the evolution of his music since the early 1970s. The hippies claimed him, and he made his best-known music during that era, but he never fit easily into the counter-cultural stereotypes. Brooding, moody, and entirely too devoted to his own unconventional path to fit in with established societal or musical trends, Morrison simply made the music he wanted to make. That music was influential enough to merit his inclusion in the Rock and Roll Hall of Fame, but much of it since then has been willfully uncommercial, the product of a man who cares not a whit about the prospect of hit singles and awards and accolades. Almost all of it has borne witness to a man on a quest for something deeper and more satisfying than the usual sensual, hedonistic pursuits. That the quest has led him down some unlighted byways and dead ends is undeniable, but few songwriters have documented their spiritual discontent and restlessness as painstakingly or as accurately as Van Morrison.

What Morrison is after—the elusive Muse that he's pursued in a career that dates back to the early 1960s—is the ineffable. By its very definition it's a slippery word, one that is impossible to pin down by creedal ... 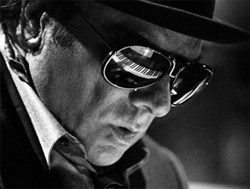