Arbitrage engrosses its viewer while disappointing with occasional lack of substance.
Mack Hayden|September 17, 2012
Our Rating

The world of finance may not be the most immediately intriguing subject. Certainly, bank heists and ransom money are common fodder for action movies, but to build an entire "thriller" around financial matters themselves though is a challenging feat. Can quarterly reports and fraudulent business dealings enrapture an audience's attention without lots of bangs and gunfights? Arbitrage answers yes, but succeeds only partially.

Robert Miller (Richard Gere) appears to balance his shrewd business sense with being the ideal patriarch of a wealthy family with easygoing certainty—at least, within the film's first ten minutes. It is quickly revealed that Miller regularly departs from his wife, Ellen (Susan Sarandon), for romantic trysts with Julie (Laetitia Casta), a French artist whose work he invests in. On one such occasion, Miller suggests to his mistress that they should leave for a tropical paradise together, leaving business and family behind. Their late night travels are cut short, however, by a car accident that leaves Miller wounded and Julie dead.

An old friend's son, Jimmy (Nate Parker), owes Miller a favor, so Miller calls him in to help him flee the scene of the crime. The night's implications make up for the rest of the film's dramatic content. It becomes readily apparent that Julie's death was merely the tip of the iceberg and this business wizard has much more to hide. Detective Michael Bryer (Tim Roth) uses his angst against the unfair acquittal of the rich to drive his quest to convict either Jimmy or Miller of the girl's death. Meanwhile, Miller's daughter, Brooke (Brit Marling), begins to see some discrepancies in her father's financial records and, thus, in the moral character she thought she knew so well. ... 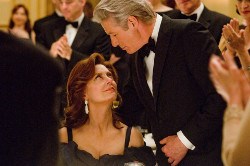