Unless you're living under a rock or in a cave or in some sort of lean-to out in the Australian outback, you've probably heard an advertisement for Anchorman 2: The Legend Returns. The character and eponymous legend Ron Burgundy (as played by Will Ferrell) has appeared in car commercials, radio advertisements, and late-night talk shows. He has done stories on ESPN. His face is plastered on billboards all over every city in the country (well, perhaps "his face" is too general—it's really just his Mustache, capital-M, bushy and immaculately groomed). The ad campaign has raised Internet ire, with people complaining that the sheer market penetration of the ad campaign devalues the cult status of the first movie, which was released in 2004. 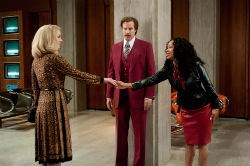 Christina Applegate, Will Ferrell, and Meagan Good in 'Anchorman 2: The Legend Continues'

But one thing's for certain: the people want more of the misogynistic, easily confused, egotistical, racially insensitive, mustachioed man named Ron Burgundy. And now we have him, courtesy of director Andy McKay and lead writer Will Ferrell. We pick up Ron Burgundy almost right where we left him: not quite the galactic news anchor the first movie predicted, Ron is now co-anchor with his wife Veronica (Christina Applegate) for a new station based in New York. The coastal shift has seen Ron pursue his previously subdued love of turtlenecks, as well as father a child with Veronica, named Walter (Judah Nelson). However, when his boss (Harrison Ford) fires him from his job, but keeps Veronica, Ron abandons his family, getting a job instead with a heretofore unheard-of 24-hour news network called GNN.

GNN's purpose, as the first 24-hour news network (at least in this universe), is basically to lampoon the modern news industry. Ron is allegedly the inventor of not only special interest stories, but also the live news report (to fill a news gap with speculation on current events that Ron knows nothing about), hyper-emphatic patriotism ("Don't just have a good day," he says, "have an American day"), and the universal sense of corporate sponsorship (Ron pulls a real news story about planes losing parts just because the owner of the airlines also owns GNN). The shots Anchorman 2 takes at the likes of CNN and Fox News are well-deserved, but a little too "safe" and sanitary—in no way is Anchorman 2 a satire of the modern media.

And that's fine. It would be totally insane to fault Anchorman 2 for not being serious and barbed enough when the first movie featured things like digressional cartoon interludes, a scene of a (clearly fake) dog being punted off a bridged by an enraged biker, Ron's dog Baxter talking down an angry bear (I could clarify the syntax of that clause but it wouldn't make anything more clear), and more. Anchorman was both the funniest and the least straight-laced movie of 2004, and for Anchorman 2 to be anything else would be totally incongruous.

So, then, what kind of movie is this sequel?

Let's draw a totally arbitrary line between two kinds of comedy: character-based and situation-based. Of course every comedy has elements of both (barring some sort of Buster Keaton-esque silent film shenanigans) but what's important here is that some comedies lean more towards one and some towards the other. On the side of situational comedies, we've got stuff like Meet the Parents/Fockers, Wedding Crashers, and most terrible sitcoms (like the modern Dads and S**t My Dad Says and Mom and Two And a Half Men and so on).

And on the other side is humor that comes from knowing specific characters and their traits, rather than just "funny stuff happens" (physical comedy, unexpected miscommunications, etc.).

There, we've got movies and shows like Anchorman 2 producer Judd Apatow's breakout hit 40 Year Old Virgin; people forget, amidst all the crudeness, that Apatow's real strength as a creator is his ability to make you feel like you've known a character for years, even if you've only been watching for half an hour. And there's Arrested Development. And Modern Family—a show that's about half-and-half, but if we have to pick a side for it, it's the character-based one.

What was special/weird/whatever about the first Anchorman is that it's almost impossible to jam into this matrix—it's almost an exact 50/50 split between random situations, like the infamous battle scene at the movie's climax, and character-based humor (Ron's response to learning Veronica wants to be an anchor: "I thought you were joking! I wrote it down in my diary, Dear Diary, today Veronica told a very funny joke!"). The random situation-based humor was pretty hit-or-miss, following pretty much the same formula as the skits McKay would have written as the lead writer of SNL—but it was the strength of the characters of the Channel 5 news team (portrayed to perfection by Steve Carrell, Paul Rudd, and David Koechner) that made Anchorman a cult hit.

And that's the main problem Anchorman 2 faces: the Anchorman from nine years ago that fans remember is only half the story—the other half was devoted to a methodical randomness that hasn't been surpassed by either McKay or Ferrell's more recent efforts. 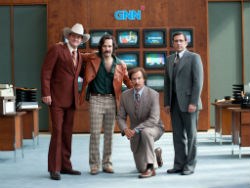 So Anchorman 2 can't help but be a little disappointing, as well as exhausting. Clocking in just a minute shy of two hours, Anchorman 2 adopts a staunch "more-is-more" position, with so many subplots, jokes, randomness, and cut-away gags that it becomes physically difficult to continue to laugh as the movie goes on. Much of the material is either a Hangover 2-like imitation of the first movie (Ron's scene of lovemaking, Rudd's character helping Ron pick out a seductive device, the tiring battle scene at the end of the movie), or just doesn't land—Ron's constant forced asides, none of which match the quotability of the first movie's "Great Odin's raven," as well as an excruciatingly long and unfunny scene in which Ron speaks in stereotypical "ghetto speak" to an educated black family.

Will Ferrell claims the filmmakers had so many jokes left on the editing room floor from Anchorman 2 that the special edition DVD will contain an entire other movie, functionally, with the same plot structure but different jokes swapped in. Which sounds amazing—but it makes me wonder if all the randomness and silliness doesn't hit a critical mass at some point. Have Ferrell & co. passed the point of not just diminishing but actually depleted returns on Anchorman's humor spectrum?

Add to that a plethora of inappropriate humor, sexual allusions, and its frankly tiring length, and Anchorman 2 becomes difficult to recommend for a trip to the theaters. McKay, Ferrell, and Apatow seem to see Anchorman 2 as a mad-lib of mindless jokes and wacky situations. So afford the movie the respect that kind of movie deserves: watch it at home, on DVD, with your finger hovering somewhere in between the pause and fast-forward buttons. And then, after watching, you'll remember ten to fifteen minutes of your favorite material, and forget the rest. Just like the first movie.

Bras are exposed, and there's a lengthy discussion of what condom Brick should use during a sexual encounter. We see two characters have sex beneath the sheets—no nudity is shown, but Ron does keep slapping his own buns suggestively. Someone is mentioned to have had their genitalia cut off, John Wayne Bobbitt-style, but nothing is ever shown. The film ends with another climactic battle scene, but there's no graphic violence. One f-word, about 15 s-words, and perhaps a dozen other mild profanities, as well as virtually constant sexual entendres, many of which are exactly as inappropriate as they are uproariously funny.